When we started our firm we were determined to making all the parts ourselves. It gives the workshop flexibility when restoring organs in different styles, and assures us that the new and restored parts will be appropriate. It means that every part will be integrated into the design and construction of the whole organ – not a variety of parts made to some other workshop’s standard specification. And it is usually the most challenging, and interesting, parts of the organ which are contracted out.

We were always inspired by the example of Derek Adlam and Bernd Fischer making harpsichords and early pianos in the workshop next door to us. Their instruments were conceived and made as a whole, the marking out and cutting of every part dependent the other parts. Not that Martin would have questioned the wisdom or his ability to make every part of the organ, but I don’t think he had made a keyboard before we set up the firm.

Probably the most challenging element in organ building is reed making and voicing, partly because it is difficult to get the practice in a small firm making comparatively few large church organs, partly because the levels of accuracy are at their most demanding. The regals in our first organs were made and voiced by me (Dominic) and were moderately successful, but the first church organ reeds, made by Martin and voiced by me were not as successful as they should have been, partly because I didn’t understand as fully as I should the disciplines of fixed-length-resonator reeds, cutting them down to meet the pitch of the tongue.

The pipes themselves were increasingly expertly made. The moulds were made by the target rifle maker John Bloomfield in a neighbouring workshop, to the model kindly provided by Peter Hopps at Harrison & Harrison. The reeds are still made and voiced in our workshop, with Stuart Dobbs and now Joseph Marsden making the pipes, and Abigail and myself voicing them.

The Trompet at St Matthew Sheffield was a copy of an early 18th century Dutch/North German reed, made by Verhofstad in 1707 when he re-voiced Bernard Smith’s organ to make it a bit more refined. It was Martin’s project and he took over the voicing of the reed from me, prudently. He was assisted by Klaas Veltman, then working for Mense Ruiter in Groningen, who was working alongside a reed-maker/ voicer who had worked at Jürgen Ahrend (Leer, Ostfriesland) who is something of a hero for us. Klaas went on to help us with the Trumpet at St Lawrence Whitchurch, and checked through the reeds at St Helen Bishopsgate with Martin.

We used the so-called historic brass, developed by Rémy Gug and available from Aug. Laukhuff. It had its problems as a material, partly because it had a tendency to de-laminate, and was not consistent in its curvature or its tempering, which was part of the point of it. Martin discovered that it flattened satisfactorily if filed, and made a steel base with clamp on which the tongues could be filed with a single-cut file.

The pictures show Sergio del Campo Olaso making reed blocks (with Martin’s notes below). Sergio now restores organs in the Basque country. Not surprisingly for a Spaniard he is an expert voicer of reeds, and relished making and voicing them in the rather more restrained English style.

Size of block / number of seconds between casting and knocking out 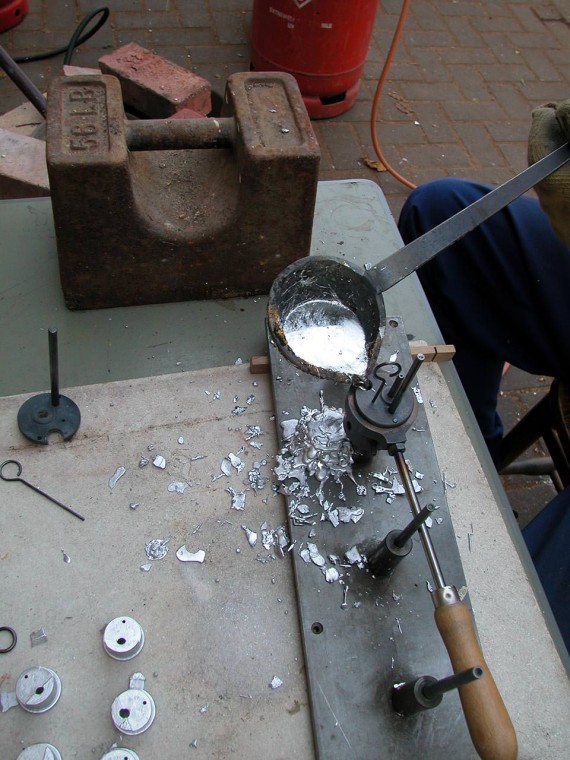 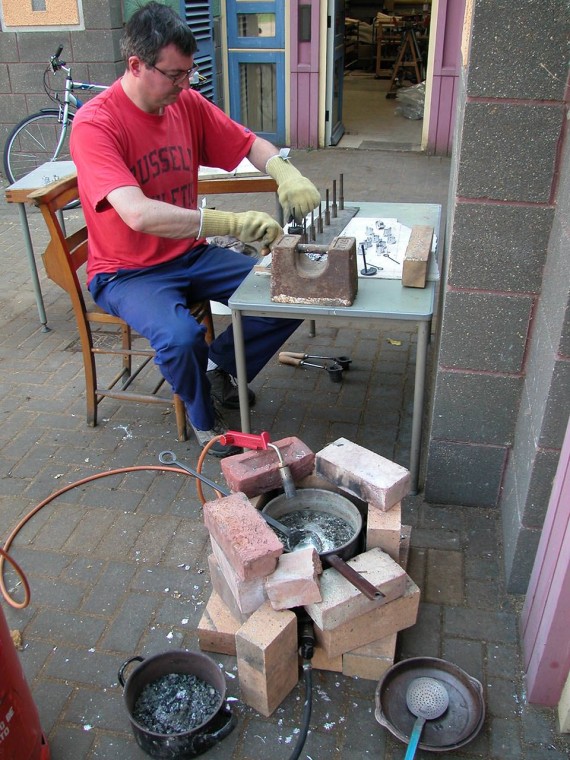 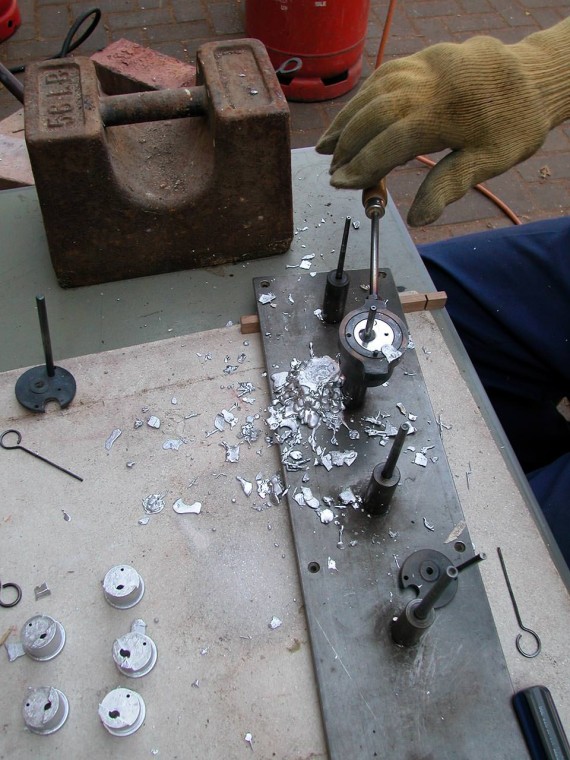 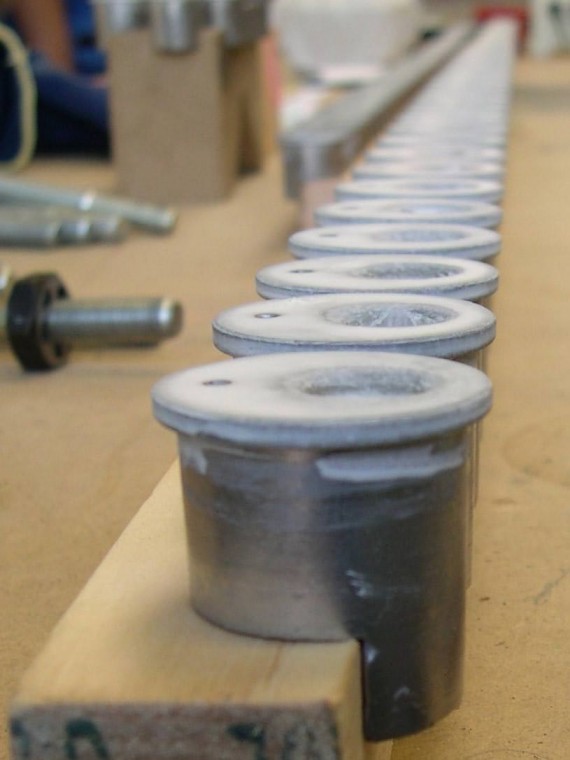 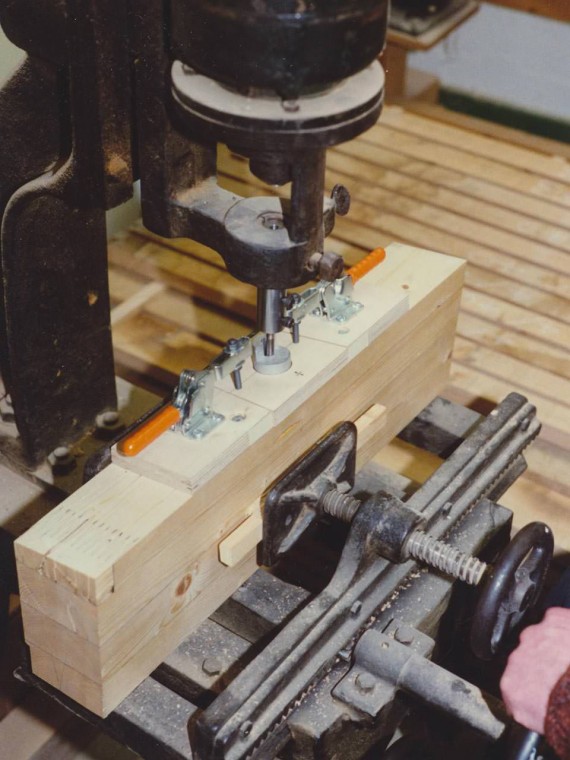 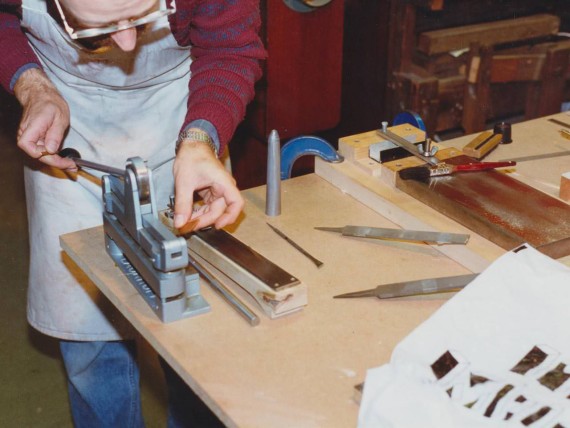 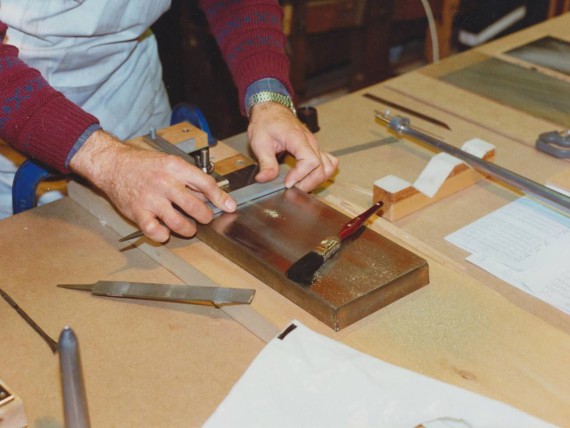 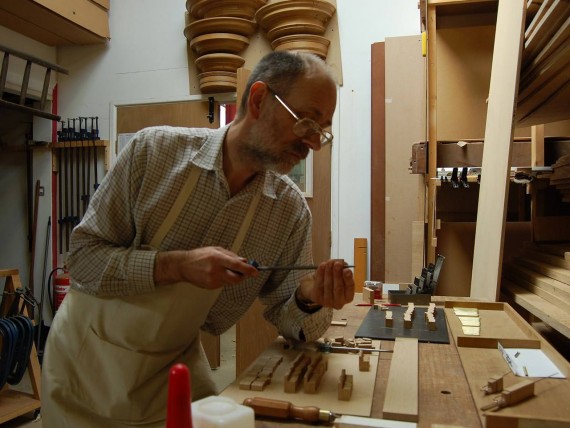 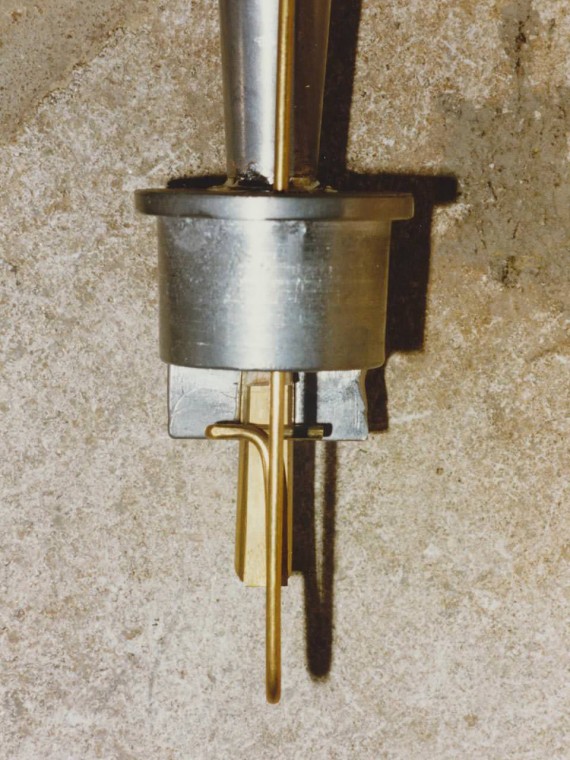