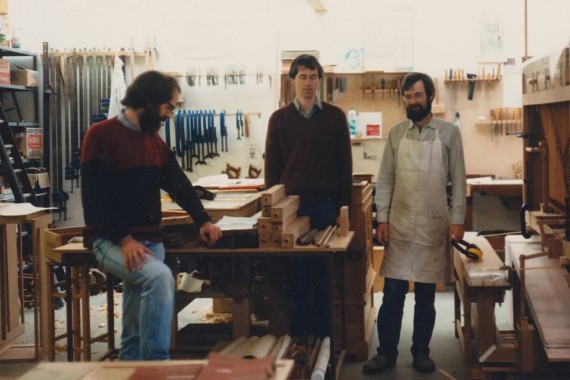 We have always looked out for new challenges and new styles of organ. At St Matthew’s Sheffield we were asked to make a small classical organ in the tower gallery. It was conceived as the first organ that Bernard Smith made in England, at the start of the development of the classical English organ, as it were, the organ of ca1670, the pipe front of which survives at Walton on Thames (which was copied for the new organ). But since the model chosen was Smith’s last organ in Holland, at Edam, this is really a pre-Schnitger Dutch organ, with an extended stoplist and compass.

This was Martin’s project and he embarked on it with characteristic thoroughness. It may also be that our enthusiasm was touched by naivety, and it may be that the organist, Andrew Wilson, got an organ rather more thorough-going in its stylistic purity than he had bargained for. The tuning system was too close to meantone to start with and was tempered somewhat after a year. More was spent on the decoration of the organ than the contract warranted, including the really beautiful keyboards made by Tudor Roberts. Nonetheless, it is a wonderful organ, which suits the space of the church very well. It was inaugurated by the late Jan Jongepier with a characteristically stylish concert on November 4th 1993, and a day of masterclasses on November 6th.

Martin’s efforts can be glimpsed in the attached report on the organ at St Matthews Sheffield of the organ and the organs he visited before and during the construction. Their success was confirmed by Jan Jongepier and other continental visitors; it is a beautiful organ, and although without a characteristically Dutch acoustic it does sound persuasively Dutch. I wish we had made more in this style, though it did persuade us to use Bernard Smith rather than Richard Bridge as a model for our new organs, if only that it was better suited to the music of the North German school, including J.S.Bach.

Bach and beyond: Three centuries of organ chorales played by Andrew Linn on the organ at St Matthew’s Sheffield, with chorale and hymn settings sung by Viva Voce (Regent records REGCD214)