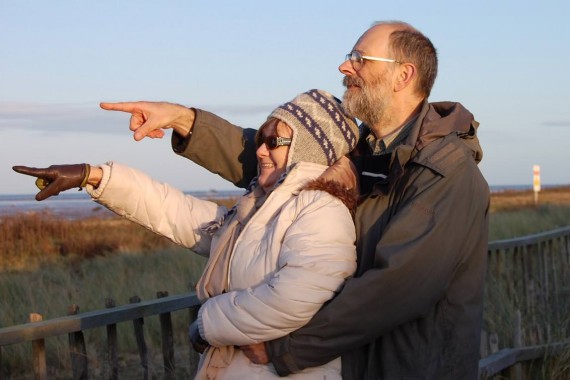 Our Chilean friend and colleague Jose Manuel Izquierdo Konig has sent us a compilation of scenes taken from short television films made by his friends Pepe Torres and Francisco Anderson, as a tribute to Martin.The link is below:

Our friend and colleague, Martin Goetze, died on Sunday August 23rd 2015. These pages are a collective appreciation of his career as an organ builder. They are divided into six parts, with comments from past and present colleagues.

The following is mostly from a CV which Martin wrote himself, I think for an application for the Conservation Awards.

1951: born in Luton on September 14th. His father Heinz came from Breslau in Silesia, his mother Sheila came from Northern Ireland.

1976: Two weeks with the Polish Department for Restoration of Organs (PKZ) examining organs unrestored, restored and being restored, and documentation.

Set up workshop with Dominic Gwynn in Northampton making new organs in historic styles, and restorations to museum standards.

1985: G&G moved to Welbeck Abbey Estate near Worksop in Nottinghamshire

Martin and Dominic carried out research on many organs, mainly in England, but some in The Netherlands, Germany, France, Italy, Spain, U.S.A., writing examination and reports. Martin usually provided the immaculate sketches and drawings, developed ways of measuring pipework and mechanical parts, etc. while Dominic tended to do the historical research, and wrote the description. Much of their work was shared, but Martin assembled and wrote the report on the organ now at St Nicholas Stanford on Avon, Harley Monograph no5.

He was in charge of the restoration of the 1826 Elliot organ at Belton House which was shortlisted for the Jerwood Conservation Award. He compiled and wrote restoration and research reports, lectures for the IBO and BIOS, and many reports and other writings for the publications of the IBO. He wrote ‘Archaeological research: casework and other woodwork’, in Towards the Conservation and Restoration of Historic Organs, ed. J. Berrow, Church House Publishing, 2000

But his main contribution to the organ world is in our organ building. Martin and Dominic, and occasionally Edward, alternated responsibility for the projects, designing the new organs, reporting and estimating for the restorations, and leading the projects. In fact you can hardly tell which of us has been in charge, and for larger projects much of the decision-making was collective. Martin did design one of our first new church organs, at the English church in the Hague in the Netherlands, establishing many of our design and workshop practices in the course of it. He was also in charge of the project at St Helen Bishopsgate, one of the first which was half restoration, half reconstruction (replacing parts destroyed during its history) and part new organ (e.g. the pedal organ). His meticulous attention to the detail, determining as far as possible the surviving original features of Griffin’s organ as a guide to preservation and a model for the reconstruction has been an example to us and to everybody who worked on it.

These words were written by Martin himself (8.3.2008 according to the computer, presumably when he stood for the board of the IBO):

Inspired by the four manual Norman and Beard organ I had played at church (made for the chapel at Luton Hoo), I decided on a career in organbuilding. At eighteen I was too old for the dozen traditional organbuilding firms I applied to, but accepted by Grant Degens and Bradbeer, whose chipboard aluminium and glass organs were a revelation.

Having gained some experience in Germany and Canada, I returned to Northampton, setting up a workshop with Dominic Gwynn making small organs. A larger church organ contract required a move to our present location in Sherwood Forest, where we have been beavering away on new and old organs of all sizes (well, nearly).

My interest in old organs stems from a busman’s holiday to see Polish organs in 1976. It was fascinating and exciting to see so many weird organs in ruins, and some that had been documented and restored. This stopped with the dismantling of communism, and now they apparently need to be restored again, a lesson in the importance of maintenance.

I am becoming more aware of the need for appropriate training for organ restorers, consultants and organists as the direction of church music is struggling to find how the pipe organ fits in.

We have a little workshop choir (not mandatory for employees) which I have taken to Italy and Spain for short concert tours including organs we have restored. I’ve not really had time to pin down any other hobbies yet.

Martin was a supreme craftsman. He had that combination of curiosity, knowledge, dexterity and amazing persistence needed to produce a good result. I doubt if any organ builder in the world could have designed and produced the whole instrument to the standard that Martin could. Our firm has completed over a 100 organs, new and restorations. Their quality would not have been so high without Martin’s contribution and direction.

Martin’s curiosity extended well beyond the areas needed to produce the good result. He was interested in church music, liturgy, church architecture, furniture design, etc. etc. which meant that he was not just a craftsman, but could see the larger picture and develop a taste of his own.

He was for me a kindred spirit, and I recognized his quality in the few months that we lived together when I started organ building in 1976. In the first week Martin produced a delicious quiche, all the more remarkable because his mother, lovely person that she was, was also one of the worst cooks. The preparation and care that went into the quiche went into every activity that I witnessed in later years, including the talks that I asked him to give, which he hated, at least to start with, and the responsibilities which we had to share when starting the firm.

He was also wise, though often only when asked. If I got into deep water with a customer’s questions, Martin would haul me out. It was a quality which many people learnt to appreciate, if they learnt to let him speak. It also meant that Martin was an excellent teacher. A number of young organ builders have benefitted from his guidance, and inherited a standard of work to which they could aspire.

I saw his self-confidence in his abilities increase during the years we were in partnership. He must have known how good he was, even though he was always embarrassed by praise. His confidence in himself increased again when started to share his life with Margaret. The Martin that I met in 1976 was not the Martin who became president of the IBO, the leader of our profession for four years, nor the director of the Welbeck Singers who took the choir on three continental tours. His contribution to my life and many other lives, has been immense.

I first met Martin when I started working in Northampton in 1976, when my new boss Rik ten Bruggencate fixed me up with a room in the small Victorian terraced house where Martin also lived. He impressed me at once by preparing a meal which I could no more have cooked myself than I could paint the Mona Lisa. Those of you who remember the 1970s will remember that the Quiche Lorraine was a sign of good taste, and Martin produced a corker, in the unpromising kitchen of 46 Melville Street. The landlord was a bus driver, and corporation bus red paint had been extensively used in the decoration of the house, including the kitchen and the outside lavatory. Having a bath started with the sound of a ferry boat starting out, and continued in a thick fog, as the antiquated geyser did its bit. We read a lot of P.G.Wodehouse and laughed ourselves silly practicing his insults, not that we ever dared use them on anyone else. Many people have commented on his dry humour, but those who knew him well experienced an earthy sense of humour that might surprise some of you.

Martin also taught me a great deal about organ building in those few months we shared lodgings together. He knew exactly what problems I was having in the workshop, and could suggest a way out of them. In return I introduced him to historic organs round Northampton, and in particular the 1630 Dallam organ at St Nicholas Stanford on Avon, on the border between Northamptonshire and Leicestershire, one of the most beautiful places, typically English. The organ is derelict, but we found it fascinating and have returned to it again and again over the years. Martin produced some of his miraculously plotted drawings of the organ – those early drawings filled me with wonder. If our professional relationship could have had the happiest of endings we would have made a modern reconstruction of that organ, the earliest surviving English organ, built by one of the greatest organ builders for some of the most beautiful music ever written.

Martin was a remarkable man, with all the attributes of the supreme craftsman. When we started making organs together we were determined to make all the parts of the organ ourselves, including the keyboards, metal pipes, the reeds, parts of the instrument which only the larger firms would undertake under their own roof. For me that resolution would have meant years of noisy struggle, grappling with craft skills which were barely within my reach. Martin approached each new problem with quiet thoughtfulness, patience and persistence. Our first organ was made entirely in our tiny workshop in Holly Road Northampton. Martin started by making the metal pipes, a skill to which he had been introduced but had not practiced. To make the pipes we needed mandrels, a set of long wooden poles graded in thickness to mould the metal round. To make the mandrels Martin made a lathe, with a motor which we bought from a local farmer. Anybody who has worked with Martin knew that he would get to where he wanted to go.

Just occasionally even Martin was defeated. When we first came to Welbeck he restored a 17th century Italian chamber organ, mostly on his own. When it was finished he painted the case. Instead of buying a pot of paint as the rest of us would, he made the colour pigment himself, a verdigris which was originally light blue instead of the usual turquoise because of the aluminium pan he had made it in. But eventually he got the colour and the medium right to his satisfaction and painted the case one evening. The following morning we came in to find all the paint, every bit of it, had peeled away and fallen to the floor, lying in a ring at the foot of the organ. Much merriment, and Martin bought some paint in a tin like everybody else.

It has to be said that we approached the business of organ building with the same innocent enthusiasm, or more correctly in this case, amazing naivety. Not for five years did I know what a budget was, a cash flow forecast against which we could compare our meagre income. But we at least had that essential thing in any business, that we knew exactly what we intended to do, and did it. So that now we, and our trusty partner Edward, and the twenty full-time organ builders and all the others who have worked with us over the years, have finished over a hundred projects, a third of them new organs and the rest restorations, and in the process have helped to revive the historic classical organ in this country. Martin’s professional contribution to my life and to many other lives and to the culture of this country has been immense.