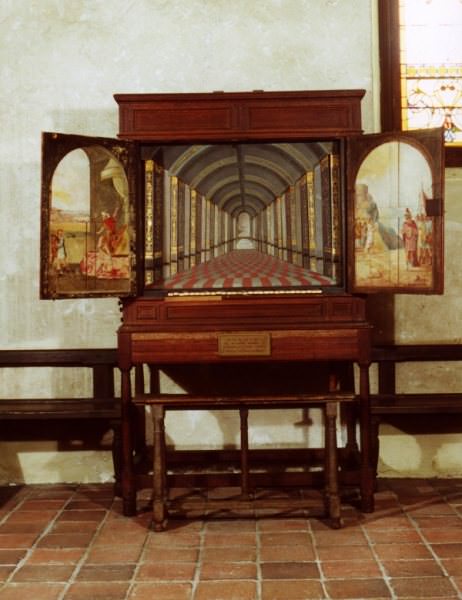 In October and November 2002, Dominic Gwynn, James Collier and Timothy McEwen repaired this historic organ, and carried out a measuring and drawing exercise to prepare for the making of a replica, planned for 2003, but not carried out. The repair followed deliberations during a residential conference at Smithfield, organised by Historic St Luke’s Church, particularly Richard Austin and Fran Olsen. The organ was measured by John Watson of Colonial Williamsburg Foundation, Robert Barclay of the Canadian Conservation Institute, the organ historian Barbara Owen and George Taylor of organ builders Taylor and Boody of Staunton Virginia. Papers given at the conference were published in proceedings edited by John Watson Organ Restoration considered (Williamsburg 2005). The report and drawings is available as a report from Historic St Luke’s Church and G&G.

The organ was bought by the Lestrange family of Hunstanton Hall near Kings Lynn in 1630. It is not impossible that a label marked is that of the original maker. The musical importance of the organ is that John Jenkins, one of England’s greatest composers, was retained by the family as their professional musician in the 1640s and 1650s. It is a consort organ, that is, it was bought for a professional musician to accompany gentlemen playing a set of viols. The Lestranges were a remarkably musical family.

The organ seems to have spent its life at Hunstanton Hall until it was sold to Captain Lane in 1949, and then bought and donated to St Luke’s in 1958. St Luke’s was an Anglican church, supposedly itself built in 1632

The compass is C AA D – c³. The Stop Diapason, Principal and Fifteenth are divided bº/c¹. The Open Flute starts at cº, but was originally intended to have a bottom octave with Stop Diapason Bass and Principal.