Consort organ in 17th century english style, made for hire 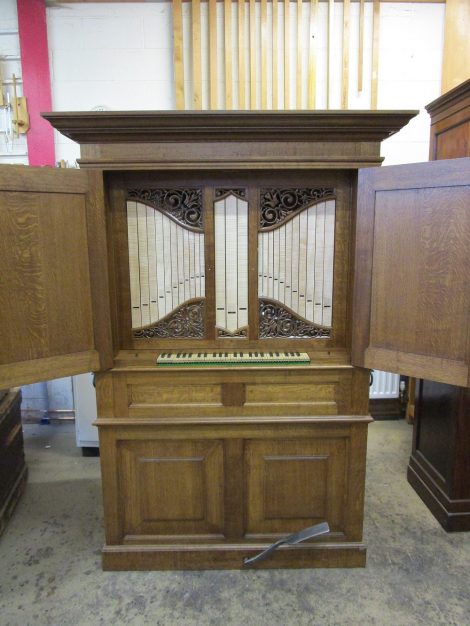 This organ was made in 2018 for playing with viols and viols consort. It is based on the organ made for Sir George Shirley in about 1630, for his house at Staunton Harold in Leicestershire, where he also employed the young William Lawes, who compiled the Shirley part books for the household’s viol playing.

Most of the pipes and the windchest from this organ survive, now in the church next to the house. All these pipes are made of pine, with oak blocks, tuning stoppers and caps.

It is very similar to the organ we made for Harm Vellguth in 2003, except that this organ has a transposable keyboard, for two pitches, at a¹=415Hz and a¹=466Hz. The tuning is 1/6th comma meantone, and two extra pipes are available for each octave of the open ranks. If the keys are moved up two semitones, then eb will become db, and bb will become ab, so c# and g# are provided for the higher pitch.

The two pitches correspond to the pitches at which sets of viols were made in the 17th century in England. The lower pitch was consort pitch, used at home, and the higher pitch was church pitch. The organ itself and the availability of the two pitches has been an obsession of Dominic Gwynn’s over the years. He has been encouraged by Bill Hunt’s (editor, researcher and former viol player with Fretwork) and Andreas Linos (researcher and viol player with the French viol group l’Archéron).

The pipes were all cut to length, but it was decided to provide pipe metal flaps, to give the opportunity for exactness in the tuning, not to change pitch and tuning system, which are fixed, as they always would have been.