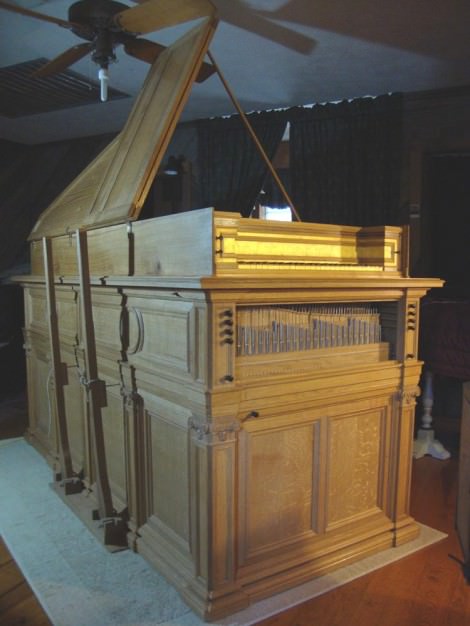 In 1579 the refugee Antwerper Lodovicus Theewes made a claviorganum for Sir Anthony Roper, a recusant Catholic courtier and grandson of Sir Thomas More, who lived at Farningham Manor in Kent.  Visitors included Thomas Tallis and William Byrd.  The remains of the instrument survive in the Victorian & Albert Museum.  The harpsichord is the oldest surviving outside Italy.  The organ is the only survivor of a type which must have been common in the courts of 16th century Europe. Henry VIII possessed several, described as ‘regals’.  Philip van Wilder made an inventory of Henry’s musical instruments in 1547; this one might have been described as “an Instrumente with a double Virginall and a double regall with iij stopped of pipes of woode  … with a foote of wainscott and the Bellowes lyinge in the same.”  The surviving parts are now in the Victoria and AlbertMuseum in London, where the case is on display.  The organ parts consist of the wind chest and upperboards, a single wooden pipe (4ft D#), regal boots made of paper, and two bellows.

In 2005 Malcolm Rose made a reconstruction of the harpsichord for Dr Joseph Kung.  Malcolm has also researched the history of the instrument.  A detailed description of the instrument can be found in Malcolm Rose Further on the Lodewijk Theewes Harpsichord. Galpin Society Journal vol55  pp279-309 (2002 www.music.ed.ac.uk/euchmi/galpin).  For the history of the instrument and its ownership see Malcolm Rose, The History and Significance of the Lodewijk Theewes Claviorgan. Early Music vol32/4 pp577- 593 (Nov 2004 www.em.oupjournals.org).  For further information about the musical context see Terence Charlston, An instrument in search of its repertoire? The Theewes claviorgan and its use in the performance of sixteenth and seventeenth century keyboard music Royal College of Organists Journal vol3 new series (2009)

In 2008 we made a reconstruction of the organ for Joseph Kung.  It has the following stops: