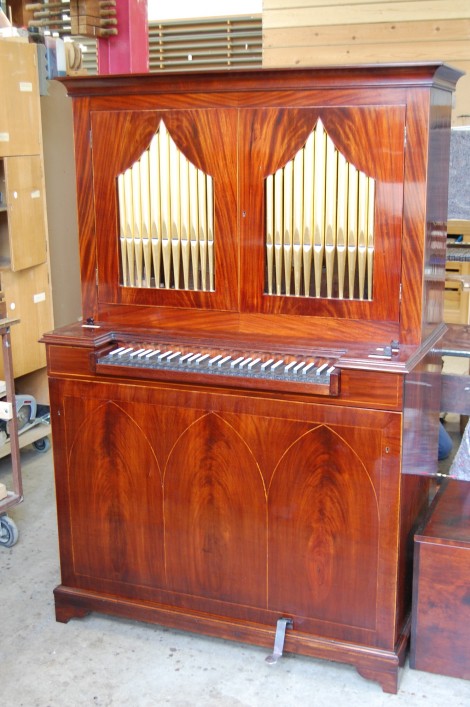 This organ was bought by David Hindle in 2006 from the Caldecott Community at Mersham-le-Hatch. It was given to them by the collector Captain Lane, in whose house Andrew Freeman had photographed it in 1944. It had been extended with a pedal board and a free reed by C.R.Oliver of Plymouth in 1975. It looks as if he was a harmonium or reed organ maker; it was neat work. In about 1800 it had been turned into a chamber organ, rather crudely, with quite a good keyboard, but a slapdash pipe front. It is not known for whom the organ was originally made. The original name label which Snetzler habitually pasted at the back of the pallet box of the soundboard had been chopped out and placed in a frame on the front above the keys. It gives the date 1754, the same date as a bureau organ now in the Horniman museum, formerly in the Dolmetsch Collection.

In 2006, the following parts of the original 1754 organ survived: the wind chest with altered upperboards, the bellows, the Stop Diapason 8ft (and one pipe from the Flute 4ft), the sides, floor and back of the case. From the mitering of the longest pipes it was obvious that the original organ stood taller than the usual Snetzler bureau organ, so the reconstructed organ has been given the form of the 1742 Snetzler in the Belle Skinner collection at Yale University. The existing veneered kneeboard was re-used, though it probably dates from ca1800, a date suggested by the colour of the wood and the fine stringing giving three gothic arches. The rest of the case was veneered in the same fashion, to cover the considerable later damage to the surfaces. The original is likely to have been made of single mahogany panels, with doors at the front. The doors use the ca1800 dummy front pipes, re-fashioned, and set in the kind of opening used in Swiss chamber organs of the period.

The stoplist was obviously: