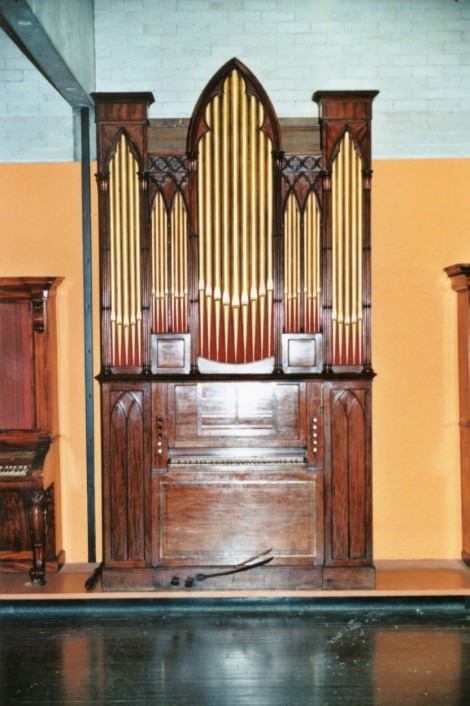 This organ is very similar in style to others by James Bruce of Edinburgh (e.g. John Barnes’s), that it may well be by him (see Alan Buchan’s article in BIOS Journal 21). There is what looks like a monogram on the f³ key, and possibly on the bass pallet. The organ would date from around 1830.

It may be that it was moved to Llanfihangel by Jardine (whose label is glued to a back panel). Whiteley of Chester last maintained the organ and rebuilt it, probably about fifty years ago. They removed the swell box, with its pipes and keys, added the octave coupler, a Gamba and its upperboard at the back, the plastic stop knobs and re-leathered the pallets about 1950.

The stop list before the 1997 restoration was (stop knob order on bass and treble jambs):

The Octave coupler and the Gamba were removed during the 1997 restoration. The stop list is now:

There is a shifting movement (with two pedals – off and on). There is a foot pedal for the player and a handle for an assistant.

The compass is GG to f³ without GG#. The keyboard slides into the case; Whiteley had fixed it for use with the octave coupler. It has ivory naturals and ebony sharps.

Originally there was a second keyboard with a small Swell organ. The evidence for this is as follows:
• the three vacant stop knob holes in the bass jamb (which are the same as the other holes)
• a hole cut out of the back of the wind trunk for a subsidiary trunk, now leathered over
• the gap between the basses of the Stopped Diapason, about as wide as the keys, with mortises in the back rail, and a large mortise in the middle of the upperboard
• the two Stopped Diapason bass toeboards rest on sawn-off portions of the rails in which the cheeks of the Swell keys ran, with tongues in the cheeks running in grooves in the rails
• there is space above the surviving keys for an extra keyboard, the space used by Whiteley’s octave coupler
• two surviving pipes from the Swell in other ranks (12th eº is marked Dulc 1 SW, 15th d² is marked pr c# Sw)

So it looks as if the Swell had a Stopped Diapason, Dulciana and Principal. It must have been short compass, perhaps c¹-f³, but there is no sign of that. The idea of two sliding keyboards is very unusual but not impossible.

The case is a light-coloured mahogany, with furniture-Gothic ornament. The case measures 3250mm tall, 1655mm wide and 765mm deep. Most of the ornaments were missing and only some have been replaced.