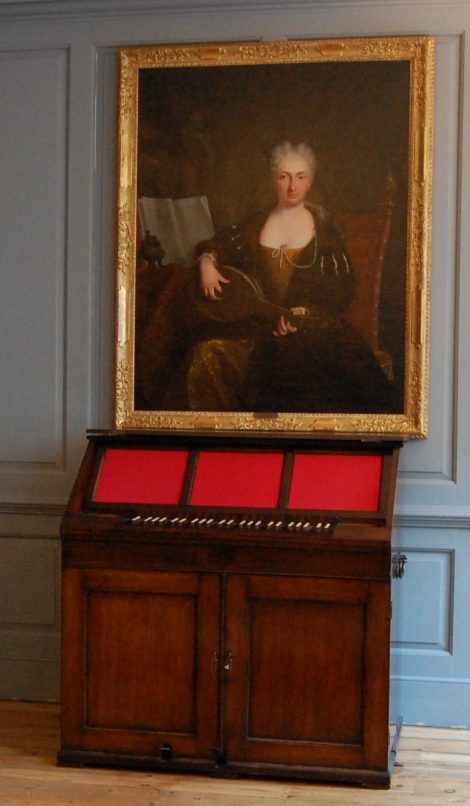 The organ was built by John Snetzler in 1752 (information provided by Snetzler’s usual label at the back of the pallet box of the wind chest). The organ may originally have belonged to a W. Macpherson, a member of the Aberdeen Musical Society, who bought it for £46. It was given to the Handel House, https://handelhendrix.org/, by Elinor Warburg, who bought it from Noel Mander in 1957. Mander bought it from the estate of Canon Wallis of Lichfield, who may have bought it from the music critic and scholar J. Fuller Maitland (and ‘Early Music’ pioneer).

It seems not to have been altered, except in ways designed to keep the organ usable. Some of the pipes are horizontal and conveyed in ways which look like an afterthought, or perhaps a later alteration to make the organ easier to tune. The 1754 bureau organ at the Horniman Museum is more logical in its layout. The case has been extended at the back. This looks like an early alteration to allow the front fall to lie flat when open. The panel above the keys, with its red fabric, is modern. The case is little altered apart from the extension, and the fabric in the panels in the frame above the keys. How this panel was organised, and the music supported, does not survive in its original form in any of the few surviving bureau organs.

In 1957 Manders restored the organ, providing an electric blower and tuning slides. In September and October 2016 the organ was restored by Edward Bennett with assistance from Nick Hagen (casework) and Joe Marsden (metal pipes). The organ was restored as found, apart from removing the electric blower, which will in future only be used for tuning, and the keyboard, which had been restored in 1957. The main faults with the organ arose, as so often, from dehydration. Edward restored the wind chest, its first ever restoration, since its bottom board was still glued in position. The bellows valves were renewed, but the main bellows leather (which was replaced in 1957) was retained.