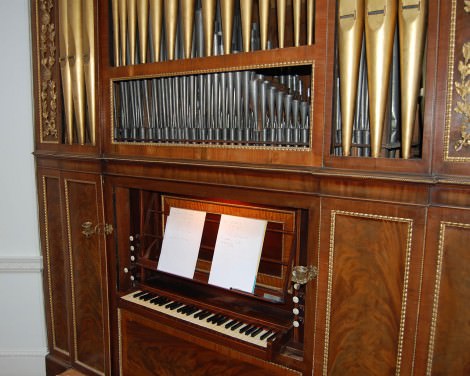 When first made a small Swell organ was prepared for, but never installed. The organ acquired its façade when installed at Wardour. There was also a second shifting movement pedal, whose pedal still exists, though the plinth only has a hole for one. The organ was tuned by Alexander Buckingham in 1835. The organ remained unrestored till 1967 when Bishop & Son from Ipswich (John Budgen) restored it, presumably for Cranborne Chase Girls’ School. Bishops removed the feeder bellows and replaced it with an electric blower, re-leathered the pallets and cut the pipes down and fitted tuning slides. The flat 18th century pitch may have been raised closer to modern A440 and the original irregular tuning system was changed to equal temperament. The fabric backing behind the feet of the dummy gilded front pipes is synthetic silk, presumably also 1967.

The organ was restored for Jasper Conran in March 2012, re-leathering the bellows, repairing and cleaning out decorators’ dust and rubbish. The tuning system chosen was an English 18th century organ tuning based on Renatus Harris’s instructions from the 1700s, used by G&G at St Botolph Aldgate ca1704. It is an irregular meantone tuning with good thirds and a spreading of the wolf fifth which makes all the keys playable round the circle of fifths.