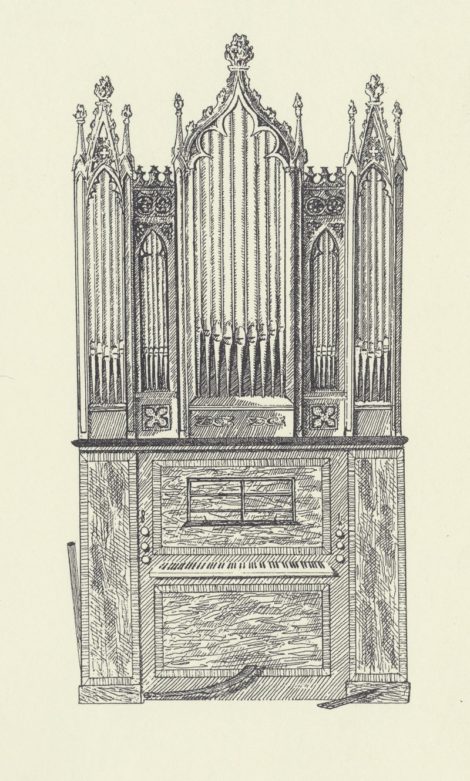 The organ was probably made by James Bruce and William Townsend in collaboration, according to Alan Buchan (Early nineteenth-century Scottish chamber organs: pipe markings and other identifiers in BIOS Journal vol21 pp136-159 1997). If Buchan is right, it would date from around 1840. It has hardly been altered. It was restored by Edward Bennett in 1993; flooding the soundboard and re-leathering the pallets, and undertaking many repairs, to the larger metal pipes, to the keys, making some new stickers, re-leathering the feeder bellows, and repairing the case ornaments.

The stops are laid out as follows:

There is a shifting movement. There is a foot pedal for the player and a handle for an assistant to fill the bellows. There is a swell front, partly glazed as was often the case with these Scottish chamber organs.

The compass is GG to g³ without GG#. The stops are divided at bº/c¹. The keyboard slides into the case. It has ivory naturals and ebony sharps.

The case is a light-coloured mahogany, with furniture-Gothic ornament. The case measures 3530mm tall, 1736mm wide and 730mm deep. It is drawn here by Meredith Ramsbotham.