KILLERTON HOUSE DEVON, RESTORATION OF 1807/1901 ORGAN FOR THE NATIONAL TRUST 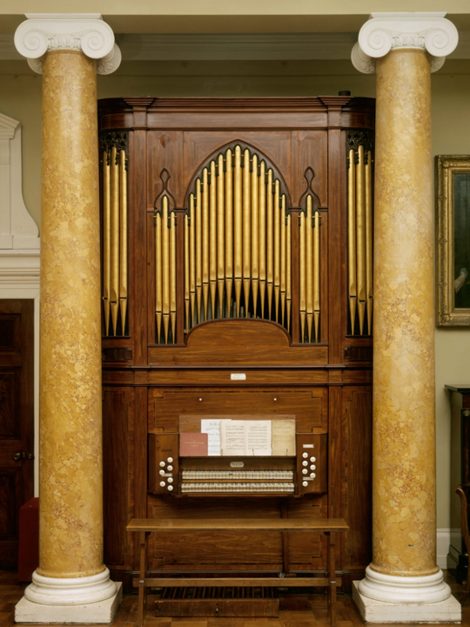 In 2019 we carried out a partial restoration of this organ for the National Trust. It was originally built by William Gray in 1807 for Lydia Hoare, the new Lady Acland, and paid for by her father. It was a large single manual chamber organ with an octave of pedals. If there was a Swell organ in 1807, all signs of it have been removed, and no pipes have been re-used in the present Swell organ, but there was often a short-compass swell box in organs of this size. Before 1901 the organ stood in the Dining Room.

Henry Dyer rebuilt it in 1901. At the time his letterhead advertised that he supplied wind by hand, water, gas and electricity. In this case he provided electricity, which may have commended him to the Aclands. Dyer was apprenticed to Henry Holdich and had worked with Henry Bevington, both conservative organ builders. It looks as if he was similarly conservative in his organ building, but in this case it would be more accurate to describe this organ as ‘built by Henry Dyer using some pipes and the casework from the Gray organ’. From Gray’s organ survives most of the Great pipework, a handful of pedal pipes (or the bottom FF – B of the Stop Diapason), the casework and support structure, and the bellows (surprisingly). Apart from the bellows, the mechanism is entirely 1901. There is a single wind chest for Great and Swell, using the C key compass provided in 1901. There is a blowing installation in the cellar, about fifty yards away, fed through a zinc trunk to the organ, no longer used. The modern electric blower uses the 1807 reservoir as a second reservoir.

Couplers
Swell to Pedal
Swell to Great
Great to Pedal

Hitch down swell pedal
The pedal board slides into the case

The pedal keys were restored. The pedal organ was supplied with pneumatic key action, but it looks as if the builder had run out of lead tubing, so that the tubes took the shortest route over the bellows, and as a result had collapsed and fallen out of their holes. The pedal key action has been restored. The keys and the playing area had been chipped and damaged, presumably when the house was used as a school. The damage has been repaired and a couple of labels replaced. The wind was fed from an electric blower on the bass side of the organ through the case panel. A new blower has been supplied standing inside the case at the back. The casework damage still needs to be restored. The pipework was mostly in good condition. The Great Stopt Diapason had an octave of pipework stolen or damaged, and the inappropriate replacement pipes have themselves been replaced with new pipes in the 1807 style.