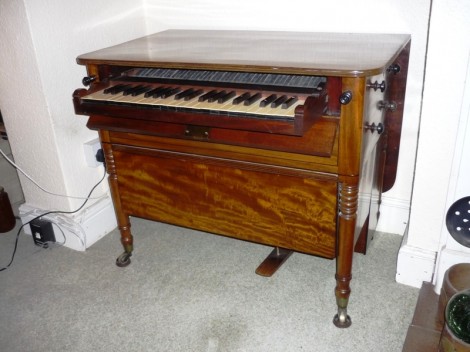 Nick Hagen restored this organ in 2014, with Joseph Marsden repairing the metal pipes and Martin Goetze voicing and tuning. The organ dates from the 1830s/1840s, judging by the case and the style of the pipes and mechanism. The organ builder is not known. The provenance of the organ goes back to the 1880s, when it was in John Cooper’s father’s childhood home in Berkshire. The organ building is of good standard, but using secondhand material. The builder may have been London-based, but there was an increasing amount of expertise in the provinces.

It is contained in a writing table which seems to have been adapted to its present purpose. One possibility is that this organ was provided for an organist who composed and wrote his own music, so that he/she could lay the manuscript paper on the table but have the keys and blowing pedal available underneath.