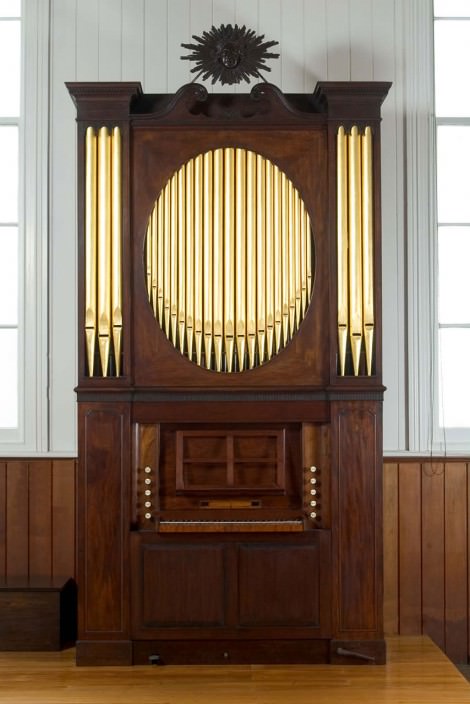 The organ was made in London, England, by John Avery, in 1779. He was living in John Street (now more or less Rathbone Place) off Tottenham Court Road in 1787. The organ’s early history is not known, until it was acquired by Bishop Selwyn of Auckland in 1859 and installed in old St. Paul’s Church on Britomart Hill, Auckland. Dr. (later Sir George) Elvey, organist of St. George’s Chapel, Windsor, selected this Avery organ, and was invoiced (£270-5 shillings) for the organ’s rebuilding and shipping to Auckland in November 1859. This date is corroborated by a faint pencil inscription on the windchest table: “This organ was repaired by John Smith for Bishop, Starr and Richardson, Lisson Grove, London, Novr. 1859”

The organ was bought in 1897 by Ponsonby Baptist church. It was altered considerably over the years, in 1879, 1909 and 1964. In March 2004, it was returned to the workshop at Welbeck and restored in 2004-5. John Maidment was advisor. The restored organ was played by John Wellingham at a workshop recital on 3rd June 2005 before being reassembled at Ponsonby Baptist Church. A dedication service and celebratory opening took place on Sunday, July 3rd. James Tibbles (Auckland University) and John Wells (Auckland City organist) played. James Tibbles has made a CD of 18th century English organ music on Atoll ACD 406.

There is a new pedal for the Hautboy swell.

The height (cornice top) is 3050mm, width (cornice) 1730mm, depth (cornice) 830mm. The mahogany case is of the finest London cabinet quality. Veneers are used around the oval pipe display, and elsewhere on the front, while the sides are of plainer solid mahogany.