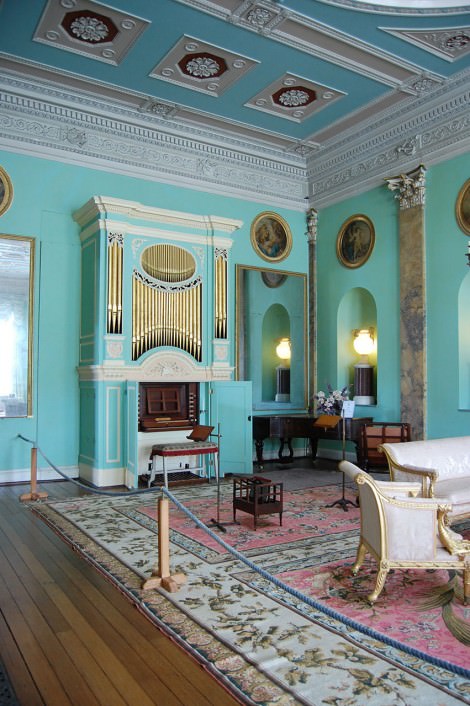 The organ was bought for £154 from Brice Seede by William Courtenay 2nd Viscount in 1769. The organ was originally only a single manual organ without pedals and was placed in the old mediaeval chapel on the site of the north range of the west court. It was probably moved to the elegant 1795 Music Room in 1837, and expanded with a Swell organ and pulldown pedals, perhaps by Henry Crabb of Exeter. The famous Axminster carpet has had to be moved away from the centre of the room towards the windows, to accommodate the organ.

In 1865 Henry Dicker of Exeter altered the Pedal compass to C – c¹ (25 notes), and added the Bourdon and in 1868 he extended the Swell compass down to cº from fº, with extra keys added to the 1837 keys, a new Oboe (‘Hautbois’), and he replaced the Swell Stopt Diapason with a new one. In the place of the Great Trumpet he added a Clarabella from c¹.

Between January and May 2013 the musical and mechanical parts of the organ were restored by Martin Goetze and Dominic Gwynn. The case has been repainted with similar colours to the original, through the whole of the Music Room, so it was decide to leave the case. The organ was left essentially as it was found.

Couplers: Pedal Coupla (Great to Pedal)
Copula (Swell to Great)
Shifting movement reducing to 8.8.2 (“to remove the loud stops”)
Swell pedal (not balanced, up is closed, down is open)

The pitch is now a¹=440Hz at 19ºC (it was lower in 1769). The tuning is now a modified 1/6th comma meantone tuning, with good thirds, and a wolf fifth divided over neighbouring fifths, indicated by the pipe lengths, provided in 1865/8.

The wind pressure is 57mm or 2¼ ins, which is presumably the same as it was originally.

The metal principals are of a single scale, which was quite usual for the period, and of the same scale as the large church organ which Seede made for Chippenham church, which was less usual. That is, they are ‘church scale’ not chamber organ scale which was six pipes narrower. The Tierce treble and Cornet are the only stop with a different scale, four pipes larger, to give an impression of a church solo Cornet stop in the treble. It is unusual at this period to have the tierce withdrawn from the Sesquialtera/Cornet. The stops together make the usual Sesquialtera 17.19.22 and Cornet 12.15.17.