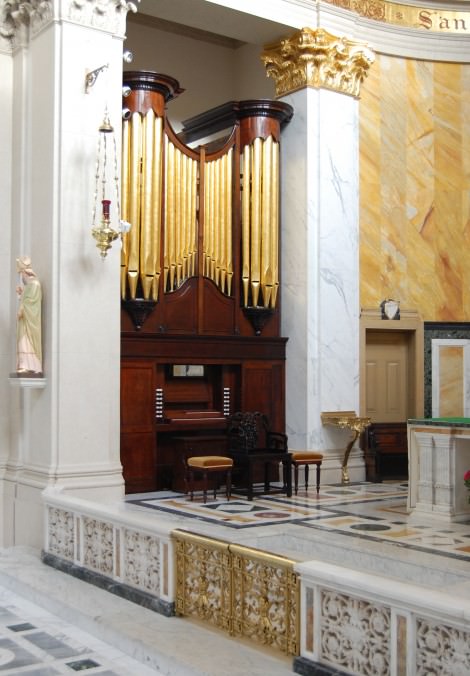 St Patrick’s church was probably the first Roman Catholic church to be built after the Reformation which was not a private chapel. It was provided partly for the Irish labourers building the ‘New Road’ (i.e. Euston Road and Marylebone Road). Because Roman Catholic worship was still illegal and could not make a public display, the church occupied the Saloon to the rear of Carlisle House, which had been run by Madame Theresa Cornelys as a venue for parties and masquerades for fashionable society, and also for public concerts, including the then fashionable Johann Christian Bach and Josef Haydn. It was here that Joseph Merlin introduced his newly-invented roller skates, while playing a violin, and crashed into a Chippendale mirror, smashing his violin and himself.

The present magnificent building was first used on St Patrick’s Day 1893. The organ, which had already been rebuilt by Hill in 1882, was transferred to the new church. In 1936 it was replaced with a new organ by Bevingtons, whose workshop was behind the church. The case was kept but the tonal and mechanical parts were moved to a new church in Maida Vale. By 1980 the new organ had ceased to function and the new church had been condemned. Fortunately for this organ, John Rowntree and Martin Renshaw brought the 18th century pipes and wind chest back to St Patrick’s and stored them in the organ, making the present reconstruction possible.

An inventory file of 1794 lists “A capital organ, long octaves in a mahogany case. Two sets of keys, great organ and swell, and one octave of double diapason pipes. Made by Messrs. Grays. Cost £262 10s.” In ca1810 Henry Leffler recorded the stop list as follows:

Pitch: a¹ = 445Hz at 18ºC the pitch established by the Great and Swell Stopped Diapasons, which have never been cut down, and the alterations to the tuning windows of the front pipes
Tuning: circulating temperament proposed by Thomas Young in 1799 which he claimed was used by the best London builders. Young lived nearby.

Leffler notes that “Mr Novello” was organist, that is Vincent Novello, organist composer and founder of the famous publishing company. Leffler also made it clear that the pedals were independent, of stopped wood and at sub-octave pitch, the earliest in England, provided for doubling the octave in Novello’s arrangements of orchestral music.
The organ sounds magnificent in the church, which is lined with marble. It will make an important contribution to a notably musical church. And it can provide an insight into the revival of Roman Catholic service music in England in the late 18th and early 19th century.

Information about the church, its services and activities can be found at www.stpatricksoho.org A restoration report with pipe measurements and other technical details is available from the builders.