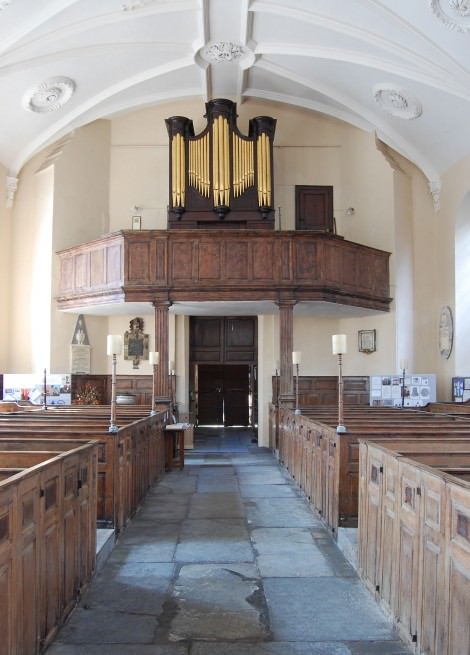 This organ was restored in 2009-10 for the Churches Conservation Trust (in whom the church is vested) https://www.visitchurches.org.uk/ and the Friends of St Swithuns (who raised the funds and now encourage the activities associated with the organ). A single manual organ was built by the brothers Robert and William Gray (according to an 1820 list advertising their organs) and installed in August 1795. By 1822 the organist John Baldwin persuaded the vestry that tastes were changing, the Principal and Fifteenth were exchanged for new ones, the Twelfth re-voiced, the Trumpet replaced with a Dulciana, and perhaps the third rank of the mixture removed, presumably all to make the organ quieter, at least in the tenor and treble.

In April 1845 John Nicholson completed a new Swell organ, and provided Pedal pipes. In case the organist found the latter tricky, they could be played from the Great keys as well as the Pedal keys. Minor repairs and the usual tunings were carried out over the years, the last being the introduction of tuning slides, electric blower and a new stool in 1956. The hand blowing survives. The reservoir is double fold, both folds are inward. Stone weights give a pressure of 60mm.

The stop list is as follows, as displayed on the stop jambs, with the Swell stops and couplers in italic. The Great stops were identified with paper labels, which have disappeared though the ink has left traces in the wood. The Swell stops and the couplers have inscribed ivory discs.

The Mixture was in 1795 and is now again 17.19.22 in the bass and 12.15.17 in the treble dividing at bº/c¹. There is a shifting movement to the Great, taking off all except the Open, Stop Diapason and Dulciana (originally working on the Trumpet).

The pitch was established between the open wood Pedal pipes whose highest level was fixed by not needing to saw any tops, and the front pipes whose lowest level did not involve soldering extra metal in the tuning windows. It is a¹ = 440Hz at 16.7°C. The tuning is a modified meantone tuning with good but not pure thirds, with characteristics shared from the tunings used by J.C.Bishop for St James Bermondsey in 1829 and suggested by Thomas Young in 1800.

Pictures of the church, and news of the activities of the Friends of St Swithuns (Chairman Will Scott) and future events (including a series of lunchtime concerts on the organ organised by Andrew McCrea) are available on their website: www.stswithunschurch.org.uk Reports written during the project are available as a restoration report from the workshop. There is a historical and technical report on the organ in preparation, available on CD, from the workshop. Dr Jim Berrow carried out the archival research. The advisor for the restoration project was John Norman.