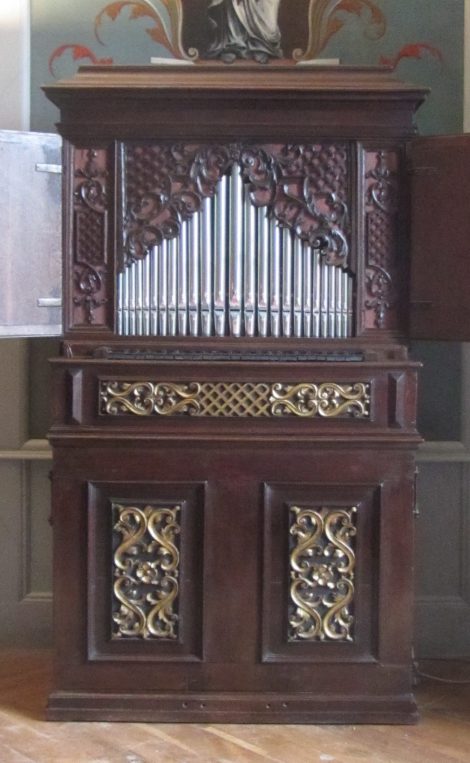 This organ would date from 1730 or thereabouts, and was made in central Europe. Such organs are often described as South German or Austrian, but could come from further afield (e.g. Poland). The method of design and manufacture is ingenious, highly skilled and artfully executed, but not standardised or uniform. They seem to have been made for important churches and wealthy urban customers, so they are fashionable in their ornament details. This organ was designed to be carried, perhaps in procession round a large church from altar to altar. There are similar organs at the Händelhausmuseum in Halle, and in the Germanisches Nationalmuseum in Nürnberg, by Adam Ernst Reichard “Orgel- und Clavicimbel-macher in Nürnberg”. They are made to be as light as possible, the wooden pipes grouped together with common fronts and backs, the upperboards whittled away wherever there are no grooves.

The earliest inscription is “1902 Adam Plachỳ Orgelbau”; newspaper used for repairs show that he was working in Salzburg Austria. At that time the front pipes were replaced, no doubt because the organ had been neglected for a period. Between 1902 and 1935 the organ arrived in Paris where it was restored by a harmonium builder, an employee of les Frères Fortin, according to inscriptions on the back of the pallet box cover: “Reparé Rue Saulnier Novembre 1935 L. Chassonneau” and “Reparé Installation nouveau moteur Rue Chaptal MARS 1946 L. Chassonneau”. In association with the provision of the electric motor, the reservoir was given two bed springs to provide the wind pressure, in the manner of harmonium building.

When purchased by Alan Rubin in 2008, the organ had deteriorated beyond use. The organ was restored in 2013-4, bringing the organ back to playing condition, restoring the bellows and wind system, making the organ wind-tight, regulating the stop and key mechanisms, making new front pipes in the style of the originals, restoring the casework and its finish.

There are no stop names. There are two stopped wood ranks, an 8ft and a 4ft with pierced stoppers. The front pipes are from the open metal 2ft, with punched dots making crosses on upper and lower lips. There is also an open metal 1ft, using the remaining original pipes, the tenor and middle octaves with conical pipes. The key compass is C/E – c³ 45 notes, the pitch now A440Hz (originally perhaps slightly higher), and the tuning now Bach (Kellner)

One oddity is that there are 12 narrow pallets at the treble end of the pallet box, apparently without any key action, though notches in the stickers indicate that it was intended to be a sort of octave coupler, so that each sticker plays the octave above at the same time, a futile idea. There are upperboard holes for all the stops which correspond to these pallets, now leathered over.