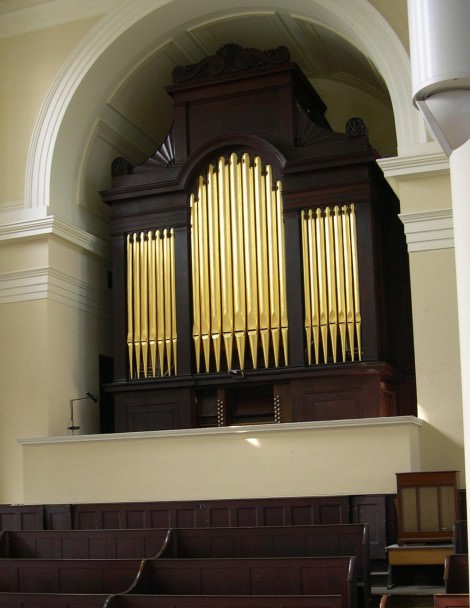 Built in 1829 by James Bishop, this was one of the largest organs in the country, in one of the largest new churches, and for a long time had the most complete Pedal organ, as well as other innovations either unique or most unusual. It had lain partly dismantled for the last 50 years, but amazingly, most of the original parts survived, at least in part or altered, strewn around the unused spaces at the west end of the galleries of the church.

Bishops had made some alterations in 1877, including turning a GG organ into a C organ. In 1975, Bishop restored the Great organ, and in 2002 Goetze and Gwynn restored the organ as close as possible to 1829 condition.

The organ is a wonderful survival. When it was made it was still a classical organ but stood on the threshold of the romantic 19th century, with a larger Swell organ, composition pedals, couplers, romantic voices, etc. It would have been intended mainly for reformed psalm-singing, but would also have illuminated a period of music when church music was becoming more elaborate, classical forms were being expanded for greater expressive content, and the music of J.S.Bach was being explored for the first time in Great Britain. It is an organ with European significiance.

The stops are as follows:

The tuning was fixed from Swell pipes which appeared to have original lengths. It is a modified form of the (approximately 1/5 comma meantone) system described by Bishop in a notebook he started in 1807.

The lower of the Swell Open Diapasons has a smaller scale than the upper. The Bassoon is from GG – dº; the Cremona from d#º – f³. However, the pipes change shape (and sound) between b° and c¹. Despite the name, the Swell Cornet has no Tierce rank. The Great and Choir Stopt Diapasons, and the Choir Flute, are open wood pipes from c¹ up. The Swell Stopt Diapason is stopped (with pierced stoppers) to the top.

Adrian Greenwood acted for the church, and Ian Bell was advisor.

The recording is available from www.somm-recordings.com SOMMCD 039 Organ music by Samuel Wesley played by Jennifer Bate at the organ of St James Bermondsey (there is more music by Samuel Wesley and his contemporaries played on the Bermondsey organ on SOMMCD 039); also www.delphianrecords.co.uk DCD34062 John Kitchen plays the Complete Organ Voluntaries by William Russell (1777-1813)