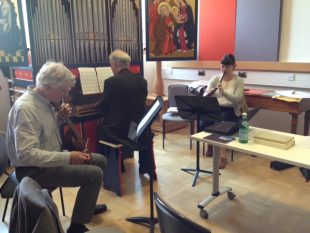 On May 23rd John Harper organized a study day for his doctoral students about sacred music and instruments in the first half of the seventeenth century in the early music centre at Birmingham University. John Harper is playing the St Teilo organ, with Bill Hunt an treble viol and Helen Roberts on Cornett. The picture was taken by Sally Wadsworth.