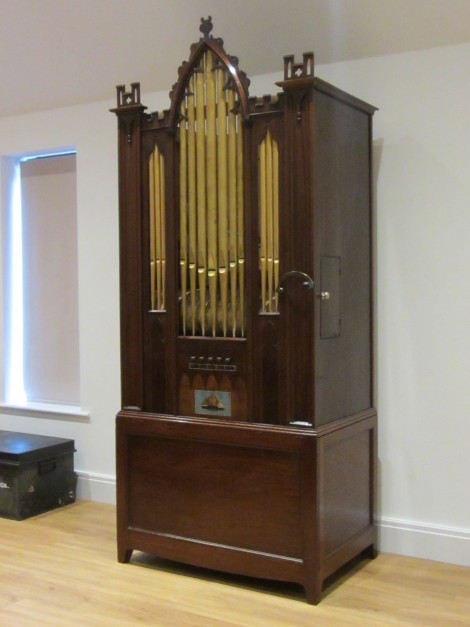 There is a painted name plate on the case but the name of the maker has been scrubbed away, apparently not an uncommon feature, perhaps by agents selling organs on as their own, etc. The royal coat of arms was that used by monarchs between 1816 and 1837, and resembles in style that used in royal letters patents. That may mean that this maker had a royal patent, but I can find none that match a short-ish name that evidently begins with ‘W—–’ or ‘W. —–’.

Barrel no4 was made by Flight and Robson according to a paper label glued to the paper round the barrel, which is also marked in ink: 3609. The label gives: Flight & Robson/ Organ Builders/ St Martins Lane/ Charing Cross/ No 101 London. The partnership existed at this address 1806 to 1832, when it was declared bankrupt. One of the tunes on barrel no5 is ‘God save the Queen’, suggesting Victoria, so presumably post-1837.

It was evidently made as a church barrel organ, but barrel no5 has secular tunes, as if the organ was occasionally removed from church for an entertainment elsewhere. It has evidently always been at Boxford.

The organ had evidently been well-used. In the middle of the 19th century the Twelfth and Fifteenth were replaced by an Open Diapason, quite early in the organ’s life, using some of the original pipes and some second hand pipes. Otherwise there are no signs of later alterations, till a bicycle pedal wheel was adapted to provide a turning handle, presumably within living memory, and the six smallest dummy front pipes had been painted with gold paint. The organ was restored to its original condition by Dominic Gwynn, Stuart Dobbs, Joseph Marsden and Nick Hagen in 2015-16. The project was the initiative of churchwarden Andrew Lyle.

The stops are labelled as follows in a row under the dummy front, from left to right:

The key compass is G to g², 26 keys spread over three octaves as follows:

There are five barrels, with 50 tunes, including favourites like the Easter Hymn, St Anns, the 100th and 104th Psalm, the Portuguese Hymn (‘O Come all ye faithful’), the Sicilian Mariners, Haydns Hymn, and on the secular barrel God save the Queen and Rule Britannia.