Erddig House near Wrexham Wales, restoration of the Bevington Organ for the National Trust 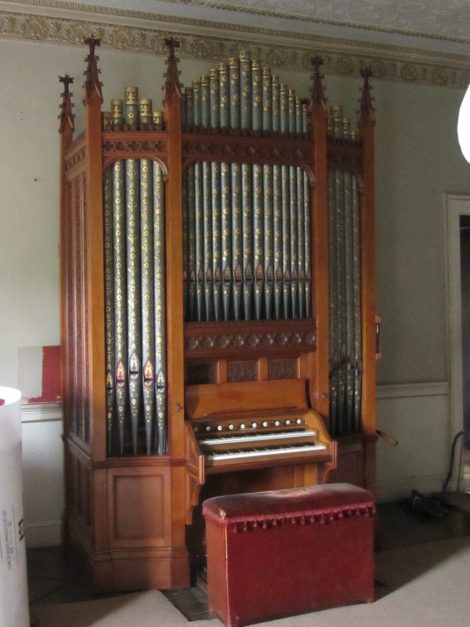 The organ was bought for the Music Room at Erddig in 1865, for Philip Yorke II, then aged 15. It was made by Henry Bevington & Sons of 48 Greek Street Soho, and cost , for £227.2s.4d. There is a Bevington printed label in the wind chest, with the date 1864 and the job number 654, written on the pallets. A history of the Bevington family is provided in Bevington & Sons told by Tony Bevington, Jill Bevington and Romana Bevington (Preston House Publishing 2013). With the organ is a dumb organist, with six tunes. In 1973 the Yorkes gave the house to the National Trust, who restored it and opened it to the public in 1977, https://www.nationaltrust.org.uk/erddig

The only noticeable alterations were to the pumping mechanism and to the swell box. A pumping handle was provided on the treble side, using one of the two feeder bellows, no doubt because use of the pumping pedal is restricted by the pedal keys. The pedal keys were originally retractable but the damage to the key action means that it is now fixed. There is no electric blower. The swell box was covered with thin boarding presumably by Whiteleys of Chester in the late 1940s (indicated by a note in blue crayon on the slats), which was removed in 2016 during the first complete restoration in the organ’s history. The work was carried out by Dominic Gwynn, Nick Hagen, Joseph Marsden and Stuart Dobbs, between November 2015 and May 2016.

Bevingtons were known for making small model organs. They were fairly conservative in their voicing style, though the stop list, mechanism and appearance were up-to-date. It is designed as a miniature church organ rather than a Georgian chamber organ. As a result access for adjustment and maintenance is very restricted, and dismantling and re-assembly was challenging.

Key compass: Manuals C – f³ 54 notes (Swell C – B permanently coupled to the Great, the Great C-B playing the Open Diapason on its own, but the same pipes as the Stopt Diapason available only through the Swell), Pedals C – gº 20 notes
Swell coupler on stop knob
Pitch and tuning: A435Hz @ about 16ºC, Equal Temperament