Great Tew, Oxfordshire restoration of the Henry Williams Organ at St Michael and All Angels 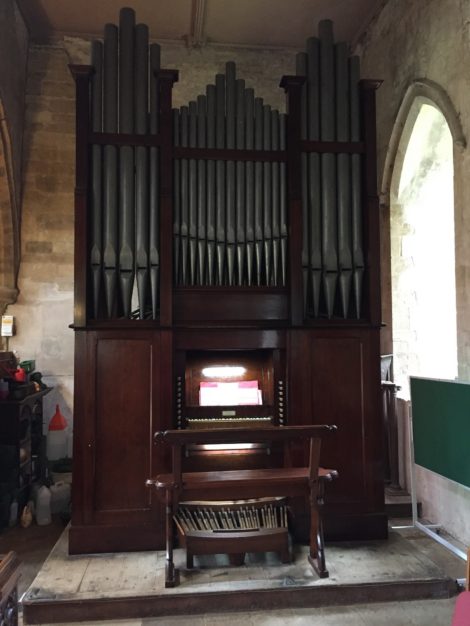 According to the former organist Mark Purcell and his wife Caroline Shenton the organ was built and provided between 1860 and 1866, probably in 1863 when the church records are missing. It was paid for by the lord of the manor, Matthew Piers Watt Boulton, grandson of the James Watt’s partner Matthew Boulton. The organ was built by Henry Williams of Cheltenham, according to the name plate, in which he describes himself as ‘from Gray & Davison’ the eminent London builders. He seems to have been their works foreman, perhaps retiring to Cheltenham for his health, but continuing to supply organs in the Gray & Davison style, and perhaps with Gray & Davison parts.

The organ was very well designed and solidly made, apart from the pedal key action, which is rather haphazardly spread around the ground frame, attached to the bellows, etc. The pedal board and the pedal key action to the Bourdons on both sides of the organ have been made more consistent and efficient. It is a very attractive and complete small church organ of the period, from a time when hymn-singing started to become a widely-adopted activity.

The organ has been very little worked on over the years. The Great Cremona was prepared for but never supplied. The Swell Cornopean disappeared after the last War. The organ was cleaned but not altered by Hill, Norman and Beard in 1975, though the Great wind chest was restored and an electric blower was provided and the hand pumping disconnected. The feeders had been allowed to drop on the pedal key action, breaking quite a lot of it.

The 2015 project consisted of a complete workshop restoration. The wind chests were dismantled, and the pallets re-leathered. The bellows were re-leathered and the manual pumping was restored. The keys were repaired, with new wood round the pivot and guide pins, and the key action too was checked for lost movement. The wooden pipes had their tuning stoppers re-leathered, the metal pipes were repaired, though the tuning sldies were kept. The reeds were replaced with new reeds made and voiced in the workshop, copied from examples in the Gray & Davison organ of 1878 now at St Anne’s Worksop. The casework was repaired, including filling of pinholes, etc. and repairs to the finish, especially around the console area.

Swell to Pedal
Swell to Great
Great to Pedal

A link to St michael and All Angels Church, Great Tew https://www.achurchnearyou.com/great-tew-st-michael-all-angels/