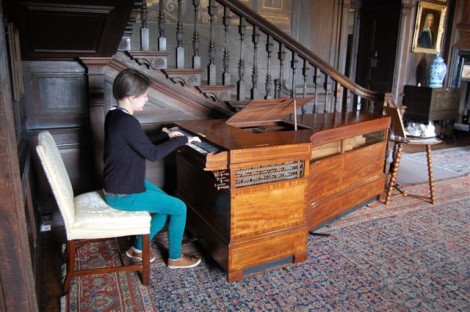 The organ was restored by Edward Bennett and Nick Hagen in 2014 for the National Trust, https://www.nationaltrust.org.uk/hanbury-hall-and-gardens. The nameboard has the inscription “Samuel Green London”. David Wickens in The Instruments of Samuel Green (Macmillan Press 1987) thinks the organ was made after 1777 from the evidence of the pipe maker’s marks on the metal pipes, and probably after ca1785 from the use of a dulciana-scaled chorus. It is an organ made from a harpsichord, retaining only its case and keys, so that it became a harpsichord-shaped organ, like the organ made by Robert and William Gray for the 9th Earl of Exeter at Burghley House in 1790. There are signs that the action may hay been partly carried out by a German piano maker.

Noel Mander bought it at “the sale of Canon Wallis’ effects, Lichfield Cathedral” in 1958, and also noted that it was “once the property of Earl of Effingham Tusmore House BICESTER Oxon”. The 2nd Earl only moved to Tusmore in 1857. In 1958 Manders added an electric blower at the tail of the case (without removing the feeder), and a new stop action. Otherwise the organ is in original condition. The ingenious 1958 stop action had its own problems and was replaced in 2014.

The key compass is apparently FF long octaves to f³, re-using the harpsichord keys with their shaped tails, but only AA – f³ is in use. The bass/treble division is c¹/c#¹. The shifting movement had never been provided with sliders