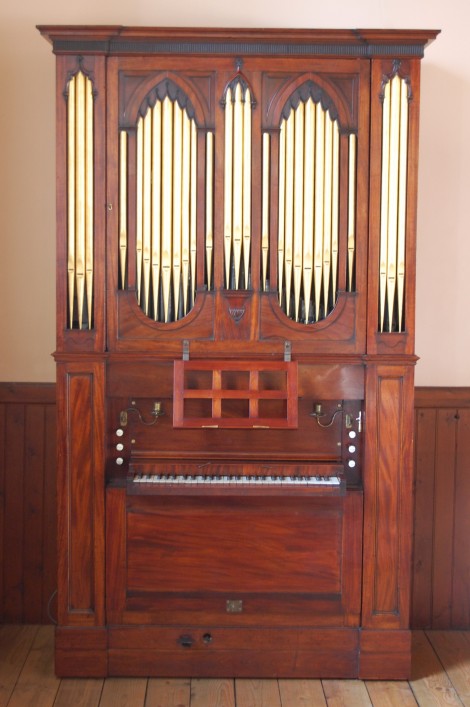 The organ was made by William Allen of 11 Sutton Street Soho London (b.1750, d.1833). His surviving organs and those of his son Charles (1811-1871) are mostly chamber and barrel organs, but they also made and rebuilt church organs. William built new organs at Peterborough (1809) and Lincoln (1826) Cathedrals. According to John Camidge, organist of York Minster, Allen had such a reputation for making chamber organs, that he was credited with an equal but undeserved reputation for making church organs. According to Samuel Wesley he had a reputation for his reed voicing, though he also incurred Wesley’s anger for not paying him a fee for recommending him to the Dean and Chapter at Lincoln Cathedral.

This organ looks as if it was made in the 1800s. The style of the case is earlier (late 18th century pattern book gothic), but Allen seems to have set up his own business only in 1794, and his earliest dated organ is the 1797 chamber organ now in Framlingham church in Suffolk. According to a pencil inscription on the thumper rail: “This Organ belonged to Mr W Kelly Organist of the [Chelsea?] Hospital Chapel and Fulham Church [… 1827?] and Putney Church Feb 7 1821”. He may have been the first owner. From 2002 it was the house organ in Fritz Spiegl’s home at 4 Windermere Terrace Liverpool.

Dominic Gwynn and Guillaume Zellner restored the organ for Harry Bicket in 2014-5, in the workshop of Martin Goetze and Dominic Gwynn, Welbeck Nottinghamshire. New horizontal bellows were made in the style of the original, to replace the one removed 50 years ago. The voicing was not much altered. The mouths of the stopped metal Stop Diapason treble had been pulled out, and the mouths of the stopped wooden Stop Diapason bass had been raised. The mouths were re-formed, but the wooden pipes sound much as they would have done originally and were left unaltered. The original 18th century style Cremona had been turned into an early 20th century Clarinet, using the existing pipes, and was left unaltered. The tuning is now by tuning slide, and the metal pipes (open and stopped) have been cut down to give modern pitch.

It was moved to the church of South Knapdale Achahoish in Argyllshire Scotland on January 29th 2015.