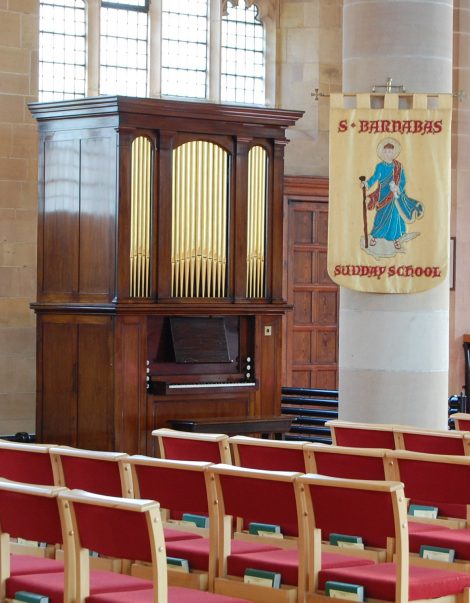 The organ was built c.1840 in the manner of J.C.Bishop, but using much of an organ of about 1800. The windchest, keyboard frame, rollerboard, Stopped Diapason, Principal, Flute and Fifteenth are of this date. The keys themselves are stamped ‘W.LOWE & SON’. The Open Diapason and Dulciana date from 1915, Martin & Coates of Oxford. The pedalboard, though old, is a later insertion since its position is incompatible with the original pumping pedal whose hole in the plinth is still there. The ‘cuckoo’ feeders to the bellows are also incompatible with this old foot-pumping mechanism. Probably the bellows too are a later replacement. The windchest has had only minor alterations. The pallets were re-covered with felt and leather in 1979.

It was probably a domestic instrument, but its first record is at Bicester URC, Oxfordshire. It was given to the Rev. T Graeme Longmuir and then went to Christ Church URC in Morecambe, and in 2019 was rescued by the Revd Michael Childs and moved to St Barnabas. It was restored by George Sixsmith for Morecambe URC in 1979. Edward Bennett restored it for St Barnabas in 2019. The case was restored by Nick Hagen.