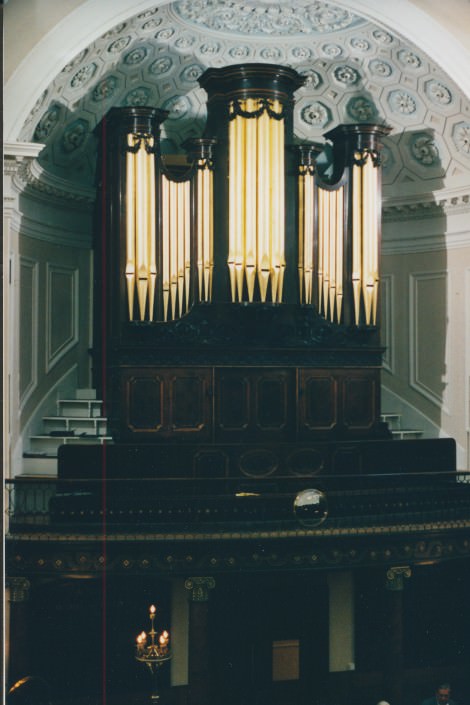 The organ was installed in the new church by Samuel Green in 1791, using pipes from an older Green organ. It was the gift of Seddons the upholsterers. It had the following stops:

It was completely rebuilt by Henry Speechly in 1867, retaining the case, Great chest and most of the flue pipes. The centre tower of the case and the carving beneath it were altered at the same time. The front was moved forward, and the back panelling was pushed out into the passage to accommodate the new Swell.

The resulting organ has been little tampered with. In 1926, Hill, Norman & Beard raised the wind pressure, re-voiced the reeds, replaced the pedal action with pneumatic, and provided an electric blower.

Speechly’s organ survives largely intact, though HN&B in 1926 replaced the pedal action with pneumatic (including the shared Bourdon on the Swell), and re-voiced the reeds, with loaded tongues and harmonic trebles.

In 1999-2000 Goetze & Gwynn Ltd (advisor John Norman) restored the organ without alteration. The case was restored by Chris Wells and Charles Marsden (including gilding the new front pipes in the middle tower, which had been replaced with zinc ones). This organ had the following stops:

GREAT (in order on chest, from front)

SWELL (in order on chest from back)

The combinations are at present set as follows (numbering from bass):