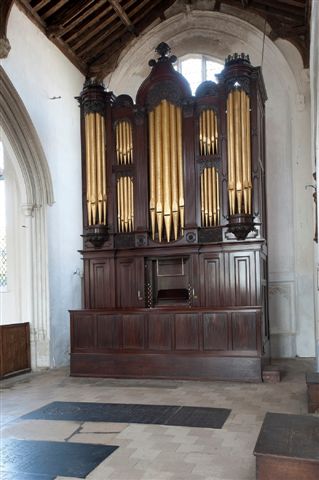 The organ was restored by Martin Goetze and Dominic Gwynn in 2013-4. It was originally built by Henry Cephas Lincoln for St. John’s Chapel, Bedford Row in Holborn, London (a proprietary chapel, i.e. not a parish church and maintained by private subscriptions and pew rents). The chapel was closed for renovation in 1821 and the organ was installed towards the end of that year before the building reopened. The organist was the daughter of the minister, Theophania Cecil, who published voluntaries in ca1812 and psalms and hymn tunes in 1814 (for the original John Harris organ, which went to Blackheath). A contemporary thought her playing “grave, devotional, and edifying”.

The new organ would have been more up-to-date and worked more smoothly than the existing organ by John Harris (1724). It had a second Great Open Diapason (though the same scale as the front Open), a mixture divided into Sesquialtera/Cornet (therefore of principal scale) and Mixture, a somewhat extended swell organ (though still with the sliding shutter of the old nag’s head swell), unison pedal pipes played from a full-size pedalboard with German-style sharps, and couplers. It also perhaps sounded less brilliant and more polite.

In 1856 it was discovered that the ceiling of the chapel had shifted and sunk, and the chapel was abandoned. The organ was moved by G.M.Holdich to Thaxted in Essex in 1858, to the north transept of this magnificent mediaeval church. Holdich was a conservative organ builder; he left the organ more or less as found, though replacing the couplers and re-leathering the bellows, with a new inverted fold in the reservoir. At the opening event Holdich himself contributed, playing a pastoral symphony.

In the early 20th century the organ was a great favourite of Gustav Holst, who lived in the village for many years and wrote much of the Planets Suite there. The organ remains intact apart from a replacement Great roller board (1907) and the unfortunate loss of the Great Trumpet, Choir Bassoon and Great Mixture (much of which was found crumpled in a box under the organ, and odd pipes in the Sesquialtera). It is the earliest surviving English church organ with (almost) all its original pipes and mechanism surviving intact.

The restoration owes a great deal to Sybil King, to the Organ Committee, and to the Foundation for Sport and the Arts, Viridor Credits and other funders. The consultant to the project was Nicholas Thistlethwaite who has written a booklet about the organ available from John Brennan (Positif Press Oxford) at jb@positifpress.co.uk. The organ from before the restoration can be heard on the Historic Organs Sound Archive pages http://www.npor.org.uk/NPORView.html?RI=N18436 played by Anne Page.

The sound file is from the Historic Organ Sound Archive of the National Pipe Organ Register. For more recordings go to http://www.npor.org.uk/NPORView.html?HOSA