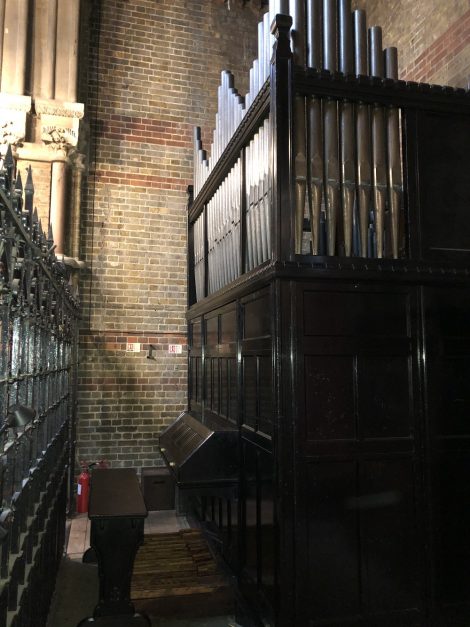 In 2019-2020 we restored the 1870 T.C.Lewis organ in the church of St Peter Vauxhall on the south bank of the Thames opposite Westminster. It was then a poor area with an ambitious priest, the Revd. Robert Gregory, who set up educational facilities, employment opportunities and churches, including this one by the celebrated Victorian architect J.L.Pearson. The church was dedicated in 1864. The organ bears the date 1870, and was hired till bought in 1873. It had a case designed by E.F.Bentley, who designed most of his organ cases for Lewis. The congregation were treated to “hearty congregational services …which are not such as to attract strangers from a distance, but suited to the needs of the parishioners”, using Hymns Ancient and Modern, as well as Gregorian Plain Song and Helmore’s Psalter and Hymnal Noted. The organ was no doubt a model organ for a limited ceiling height, available for hiring at a modest cost, for accompanying a choir rather than a congregation, but the full tone of Lewis’s organ and the acoustic at St Peters help to send the sound ringing round the church.

It has never really been restored, though works were carried out by the organist and volunteers around 1970, removing the swell box and carrying out some cleaning, and the chests were restored somewhat unsympathetically presumably by an organbuilder. The swell box has not been replaced. It is curiously at the front of the organ facing backwards, so that the effectiveness of both the Swell pipes and the Great pipes would have been compromised. On the other hand the organ does get dirty. It is also curious that the case front consists of a row of dummy spotted metal pipes, which must have cost a lot in the context of this small organ.

The organ had been supplied with an electric blower despite which the flexible trunks between the top leaf of the bellows reservoir and the wind chests had torn, and the wind leaks were considerable. The blower was very noisy, and was repaired in the workshop with a new motor from James Richardson Jones. The bottom pallets were originally split (with piggy-back pallets) to break the pluck and reduce the weight of the key touch. The pallets had been re-covered with felt and leather, presumably around 1970, and were no longer split. All the leather, of bellows, trunks and wind chests has been replaced with new leather. The pedal key action has large rollers at 45º taking the action through 90º from the pedalboard to the chest on the treble side. It was so corroded some of the rollers hardly moved. The pedal couplers had also ceased to operate, so that the stickers fell out. All that has been restored. The pipework has suffered from the effects on the voicing and tuning of the dust and dirt, and needed restoration in the pipe shop, as well as to the voicing. New dummy front pipes were made for the treble side by Joe Marsden and the characteristic black lacquer finish restored by Nick Hagen.

Viridor Credits and The ON Organ fund provided grants for the organ restoration.