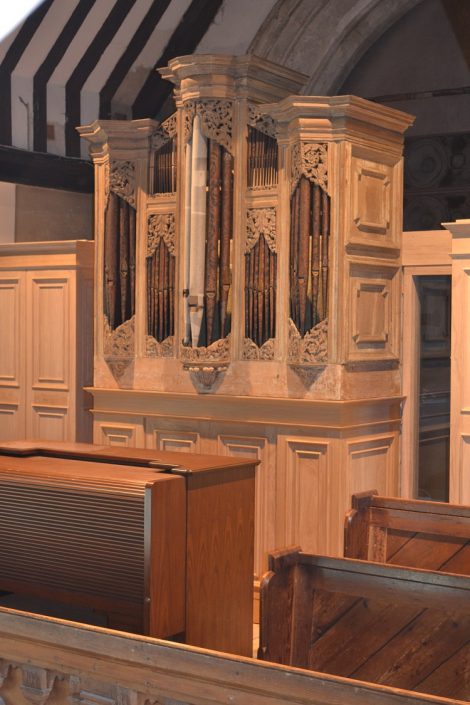 The organ was supposed to have been the one made by Bernard Smith for the private chapel at Windsor Castle in 1673-4. It seems an unlikely story since there is no subsequent story about this organ having been royal, and the standard of the casework does not seem to be the same as the rest of the chapel. However, on stylistic grounds there can be no doubt that this organ case was made by Bernard Smith, and that it was one of the first that he made in this country.

The organ was rebuilt by Hedgeland, by Bishop and finally by Rushworth and Draper in 1936. The organ was seen and photographed by the Revd. Andrew Freeman in 1910 and ca1920. In all this time the 1673 front remained attached in a rather undignified way to the front of an expanding organ. This organ was replaced with an electronic organ in 2003 and finally removed in 2009. Nick Hagen made a new lower case in 2009, as it might have been made originally. It is not impossible that a 6 or 7 stop organ in the style of Smith’s organ may one day again fill the case, alongside the electronic organ. Or that one day Elizabeth Holford may be asked to conserve the painted pipe front and paint the woodwork as it might have been originally.