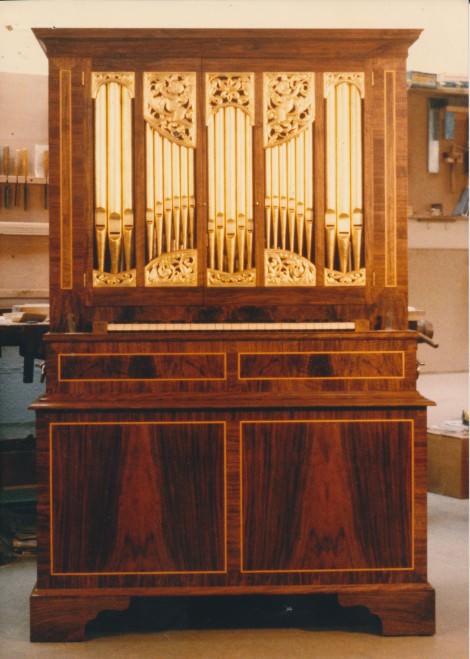 This organ was designed for hiring to the Early Music world, and has been recorded frequently. It now belongs to Philip Ridley, who still hires it out (01223 842922 philip.ridley@ntlworld.com)

The organ is based on late 17th century English chamber organs, particularly Compton Wynyates in Warwickshire and Wollaton Hall in Nottingham.

The Stopped Diapason is wood, the rest metal.

The compass is C- d³, with four available pitches.
The pipes have tuning slides, for different pitches and tuning systems.

The case front with its gilded dummy front pipes is based on the organ at Belchamp Walter in Essex. The case is decorated with English walnut veneer

The recording is available from www.hyperion-records.co.uk CDA66338 John Stanley Six Concertos (including two for organ) played by Paul Nicholson and the Parley of Instruments directed by Peter Holman; it has been used in other recordings by them, e.g. CDA66700 English 18th Century Concertos (including Handel and Roseingrave organ concertos) and CDA66564 Suites, Voluntaries and Fugues by Thomas Roseingrave on harpsichord and organ