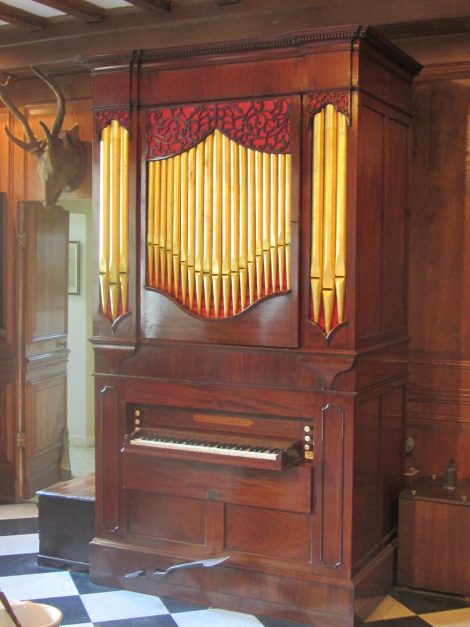 This chamber organ was restored after water damage. The owners have asked to remain unidentified. It dates from two periods. It was originally made around 1680, and the pipes from this organ were used in a new organ by Robert Gray in 1775. The pipes are all made of wood, and are typical of 17th century chamber organs. These organs are often ascribed to Father Smith, the Kings Organmaker, and the pre-eminent organ builder of his day. It is a tradition that started early in the 18th century, though the style was already in existence when the German Smith came to England, and it seems more likely that his workshop took over their manufacture to such an extent that later generations thought of them as his.

Robert Gray decorated his case with this inscription: “This organ was originally built by that celebrated artist commonly called Father Smith and erected in its present form by Robert Gray of London 1775”. As well as the case and the mechanism, he provided an 18th century mixture, about two thirds of which consists of the smallest pipes of the 17th century organ, and divided it into bass and treble halves, so that one can use the treble as a solo Cornet, a stop whose mixture of fifths and thirds gives a reedy sound, exploited by Georgian composers.

The organ’s appearance is entirely Robert Gray’s, with a mahogany case, gilded dummy front pipes, and fretwork shades backed with red silk above the pipes. The keyboard is unusually decorated, with ivory naturals and ebony sharps, arcaded fronts to the naturals, veneered key cheeks and a moulding round the bottom edge of the cheeks and key rail. The bellows, wind chest, stop and key action are all Robert Gray’s. He probably also provided the lead tuning flaps to the open wood pipes, which would originally have been cut to length and fine-tuned with a knife. He therefore altered the pitch and the tuning.

The key compass is GG AA C D – e³, the mixture dividing at c¹/c#¹. The pitch is a¹=440Hz, and the tuning system used is the late Alexander Mackenzie’s reconstruction of a Georgian tuning system, named by him ‘the common tuning’.