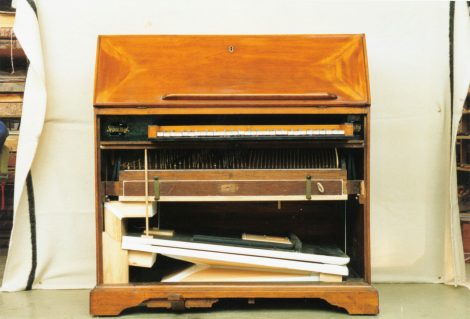 The origins of this organ are unknown, though it may have been made in Hamburg and spent all its life there till 1938. It is so far as we know unique, though such organs may once have been common. Derek Adlam told us that the keyboards are typical of late 18th century Hamburg keyboard instruments (red scribe lines on the naturals, long naturals and sharps and paper fronts). The variable quality of the different parts of the organ suggest that it may have been rebuilt from existing parts. The case has a superficial resemblance to English furniture, which Derek Adlam tells us was a feature of furniture from the Hamburg-Schleswig-Denmark region at the end of the 18th century.

When Christopher Hogwood bought it from the sale of the Sieverts’ estate in Ithaca, NY, in 1994, some documentation came with it. The organ had been “entirely restored” by E. F. Walcker & Cie., Ludwigsburg in 1929, and was sold to Oskar Sieverts in 1936. The organ was again repaired by Rudolf von Beckerath in 1936, which he did himself, because of the “age and value of the instrument”. It was visited and admired by H.H. Jahnn and Helmut Walcha. In 1938 it travelled to the U.S.A. with the Sieverts, and from 1938 to 1962 it was on loan to Yale University’s School of Music. There it took part in Paul Hindemith’s early music concerts. In 1962 it moved to Mrs. Sieverts’ house and was restored by Richard Strauss (not the composer!). In 1995 it was restored by Marcus Stahl at Martin Goetze and Dominic Gwynn. Marcus made a beautiful copy of the organ which can be seen on his website at http://www.marcus-stahl-orgelbauer.com/instrumente/bureau-orgel-barockes-kammerinstrument/

The organ has two stops, Gedackt 8f. and Flöte 4f. both stopped wood, made of quartered oak. The keyboard is pulled out of the case to play. The keys are of oak, with overlay for the naturals in ivory with four red scribe lines, and with sharps of stained hardwood, possibly boxwood. The key fronts were missing and have been replaced with embossed paper. The key compass is C to d³. There is a single-fold wedge bellows, with two metal bars screwed to it, which produce a wind pressure of 50mm. The case is made of oak with 6mm mahogany veneer, now rather light in colour. There is a Harley Monograph by Marcus Stahl: https://www.dropbox.com/s/jwb929qerkvuh3q/18%20north%20German%20bureau%20organ%202014.pdf?dl=0

You can hear the organ being played below :