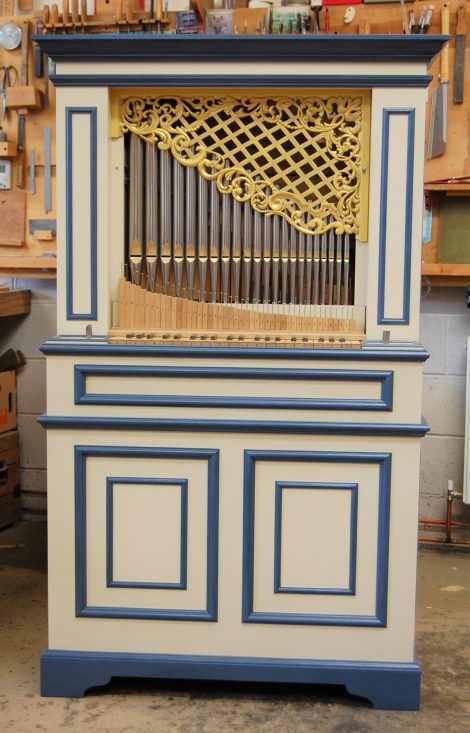 This is a new organ made in imitation of German positive organs of around 1700, for Dr Christopher Kent in 2019-20. It is based on the organ which we restored for Alan Rubin in 2014, which was made in around 1730 probably in Salzburg. It is a standard German positive organ of its period, rather old-fashioned, not least in its short octave.

Surprisingly little has been written about these small German organs, though a number survive from the Nürnberg Stadtorgelmacher, whose work was exhibited at the Germanisches Nationalmuseum in 1995, and written about by Jürgen-Peter Schindler. There is also the published work of Theodor Wohnhaas and Hermann Fischer, which catalogues surviving positive organs in Franken and Bavaria, though it does not help the outsider to classify their origin or their makers, or appreciate what they were originally used for. One can imagine a scholar-musician like Christopher Kent studying a wide repertoire of music on such an organ in the years around 1700.

It is typical for having three different sound qualities in a small organ, stopped wood 8ft and 4ft flutes, open metal 2ft in the front and a regal in the front, the width of each pipe more or less the same scale as the keys, as they would have been in the instrument known as the regals. This regal is based on Brussels Musical Instrument Museum MI 1130, which was made in 1676 by a German maker for an Italian. We copied it for the reconstruction of the 1579 claviorgan by Lodovicus Theewes in the V&A museum (now at Oberlin College Ohio).