COCKERHAM IN LANCASHIRE, RESTORATION OF THE HILL & SON ORGAN IN THE CHURCH OF ST MICHAEL AND ALL ANGELS 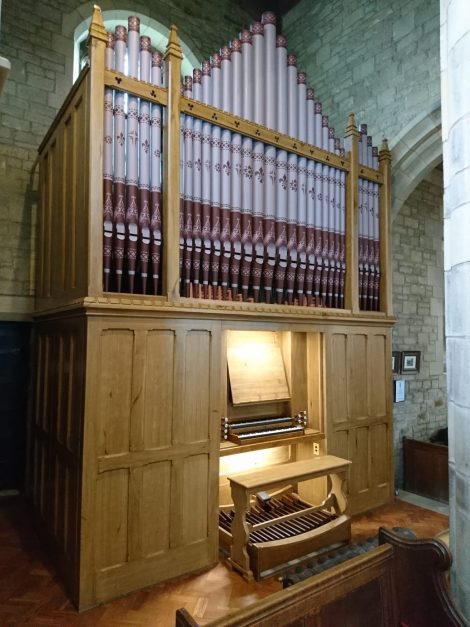 The history of this organ was researched by Rod England, who was also instrumental in having the organ restored and raising the funds, on behalf of the church.

The organ dates from 1867, and was made for Holy Trinity Episcopal Church in Stirling. It was built by Hill & Son (job no.1222 in the Hill estimate book, and markings in the organ). It cost £250. Like the organ at Rothbury, it looks like a standard organ, responding to the spread of congregational hymn-singing.

The organ was replaced by a larger one in about 1877. It probably spent the next 25 years at Tetley Street Baptist church in Bradford, which closed in 1903. It then went to Zion Baptist church in Morecambe. In 1978 the size of the church was reduced and the organ was moved to the floor. In 1986 the organ was sold to the church at Cockerham, and moved by Leigh Harding, who redecorated the case and front pipes, and changed the stoplist, mostly by moving existing stops.

When G&G restored the organ in 2018-9 the case was redecorated as it had been originally, with new stop knobs (turned by Mike Law) and labels in the original style (engraved by Malcom Long) and the woodwork grained to resemble oak (by Nick Hagen). Ten new zinc pipes were made by Terry Shires in the style of Hill, to replace those replaced in the side fields of the front. An earlier finish was restored by Chris Wells. Chris removed the silver Hammerite paint, a layer of gold paint, the traditional stencilled scheme now restored, a layer of copper paint and the first layer of hospital green with dark green tendrils and leaves. The pipes now have a dove grey background for the bodies and maroon for the lower bodies and the feet, with maroon and pink stencilled ornaments (by Bethany Wells), including the logo of the Cockerham primary school.

The stoplist was restored to the original, with a new Swell Open Diapason and the original Dulciana which had been in store with Leigh Harding. The organ was revealed to the local people on Wednesday March 13th, and there was a service of dedication on April 28th with the Archdeacon of Lancaster the Ven. Michael Eeveritt, and an inaugural organ recital played by Ian Pattinson of Lancaster Priory.