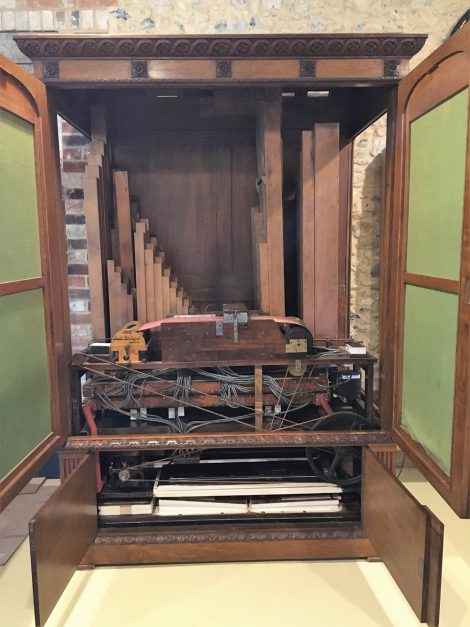 The organ was built in 1862 in Vöhrenbach in the Black Forest, Germany, an area famous for its clocks, cuckoo clocks, musical clocks and clockwork-driven barrel organs. They were often built by farming families to keep themselves busy during cold winter months. This organ was made by Fidel Heine, one of a large family in the orchestrion business. The family traded with their friend Daniel Imhof (of whom more later) who also set up a base in London to serve the market fuelled by the Industrial Revolution, later ‘Imhof & Mukle’ in New Oxford Street.

The following is lifted from an article written by Henry (brother of our Edward Bennett) for the magazine The Musical Box: “My great-grandfather Thomas Bazley moved down to Gloucestershire in 1867 from Manchester where he had prospered in the cotton industry. He was a true Victorian polymath, educated at Trinity College, Cambridge, with wide ranging interests in every new development. He was a keen astronomer. He owned a Holtzappfel lathe and produced intricate engine turned works in ivory and wrote the definitive book on the Geometric Chuck, used to produce the complex patterns on bank notes designed to prevent forgery. He also had a Welte Mignon piano player with wooden keys to fit over a piano keyboard. The Flute Organ was procured for him by Daniel Imhof in London. We don’t know the exact date, but we do have a letter from 1964 recalling the “Flute Instrument” in 1897, still with large wooden barrels 30-36 inches long and wound up with a tool like a car handle…. The letter then says that Thomas Bazley’s son had it “electrified”, i.e. converted to the pneumatic system by Imhof & Mukle during the early years of the century, and adds that they were later asked to repair it when it no longer worked but “they no longer do that kind of thing – they only go in for wireless etc.” World War One dashed all hopes of repair, and in fact nothing is heard of the instrument until I discovered it myself carefully packed away.” Henry himself repaired the instrument in his teens, and after various vicissitudes, re-possessed it, and determined to have it restored. Joseph Marsden spent many months meticulously seeking out the defects in the mechanism, and particularly in the pneumatic system, so that the organ now makes music as flamboyantly as it ever did. The experience of hearing Wagner’s Tannhäuser Overture, or Mendelsohn’s Midsummer Nights Dream, on this instrument is captivating and unusual.

“The organ” continues Henry “has 150 wooden pipes, all with round mouths commonly termed Viennese Flute and somewhat unusual in normal organ design. These are played from wooden cassettes of manilla paper, 200mm wide and extremely tough. Spring loaded needles pop up through holes punched in the card and trigger a three stage vacuum pneumatic mechanism. The pipes are arranged in three ranks or ‘stops’ – loud, medium and soft, controlled by needles at the edge of the roll to vary the volume, and another needle rewinds the music at the end and switches the motor off.” There were originally 26 cassettes, but four, including Tchaikovsy’s 1812 overture, have gone missing in recent years.