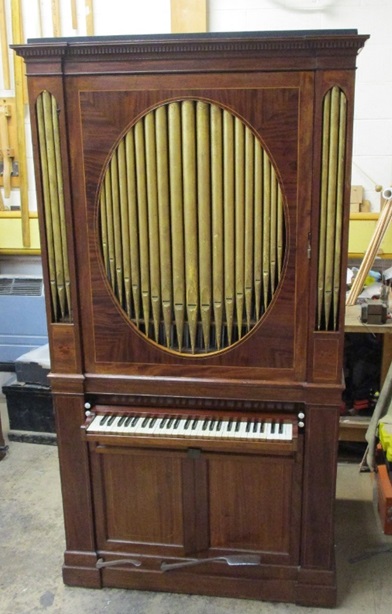 The organ is anonymous and there are few obvious identifying characteristics. We have no idea for whom it was made. Such organs were made in large quantities at the end of the 18th and in the early 19th centuries, for the increasingly wealthy and culturally aware commercial classes. A number of organs survive with almost the same design and layout, almost the same style of organ front, and almost the same manufacturing characteristics. This chamber organ at the Horniman Museum has no label and is unsigned, but it has a clue which suggests it may have been made by Joseph Beloudy.

The inside of the wind chest was revealed during restoration. The pallet box is lined with paper covered with writing exercises, from the same period as the organ. The exercises repeat the same proverbs, such as “reason is given to rule our lawless passions”, and individual letters. In the Summer issue of The Music Box (the journal of the Musical Box Society of Great Britain), Arthur Ord-Hume writes about Joseph Beloudy – An unsung genius of the 18th century (The Music Box vol28 no6, summer 2018). The practice of lining bellows and pallet box with similar writing exercises is illustrated in his article, but including the name of the writer, “M Ann Beloudy July 30th 1791”, the daughter of the musical clock and mechanical organ builder. They lived at 2, Collier Street, Pentonville, near Holloway on the northern edge of 18th century London. Ord-Hume gives other examples of his work, notably a spectacular musical clock illustrated on the cover of the autumn issue of the Music Box, and a barrel organ at Calke Abbey, made in 1793 and restored in 1988, which could be examined for similarities with this organ.

Beloudy appears in the fire insurance records of the period, along with other unfamiliar names, insuring his premises and stock for small amounts. This organ is well-made, though not of the highest quality available at the time. I would not associate its maker with the superb quality associated with the spectacular musical clocks of the same period, but nonetheless, I think it is safe to attribute this organ to Joseph Beloudy, and probably in the first half of the 17990s, when Mary Ann was being schooled.

The organ was bought by the Horniman Museum at the sale of Richard Burnett’s collection of keyboard instruments at Finchcocks, near Goudhurst Kent May 11th 2016 (accession no. 2018.3). Richard Burnett bought it from Martin Renshaw in 1976. Martin carried out a certain amount of restoration work carried out before and after. Martin Renshaw bought it from Mr R E Diggles at Stansmore House, New Road, Alton, Stoke-on-Trent in mid-August 1975.

The organ was restored by Christopher Davies, with assistance from Ben Marks (keyboard) and Nick Hagen (casework). The main problem was a loss of wind, which proved to be in the wind chest, which was dismantled and restored, revealing the writing exercises in the pallet box. The key depth was too shallow, the keyboard frame was insecure and the stops had ineffective notches for the shifting movement. The back of the keyboard frame now rises on wedges, bringing the cheeks under the stops, and increasing the key depth. There were numerous defects in the pipework which made voicing and tuning difficult. The restoration report is available on this website.

A shifting movement removes the Principal and Fifteenth, the sliders being held in the ‘on’ position on notches with springs.