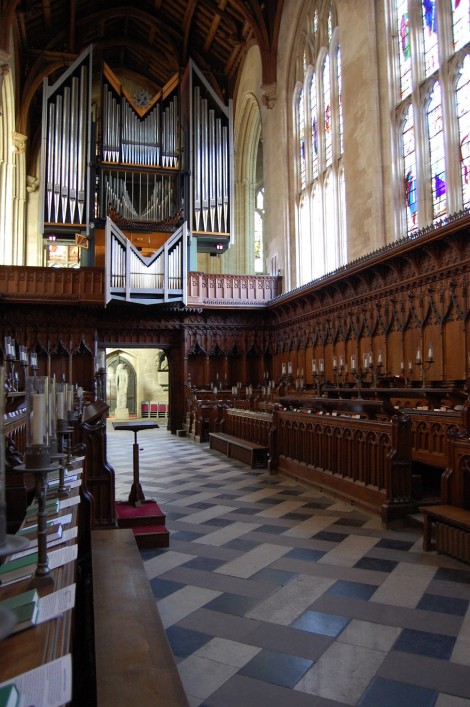 In 2013-4 we carried out a partial restoration of this organ, to reverse some of the effects of 40 years of intensive use, and revive the original verve of its sound. This organ has a special significance for us, because Grant Degens and Bradbeer was the firm where Martin and Edward started their organ building careers in 1971, when this organ seemed to presage the future of British organ building.

The organ was made in 1969 when Sir David Lumsden was Director of Music at the College. It is difficult now to remember what a radical departure it was, not just “the new look” and “the new sound”, but being “new” at all. In our travels to the continent in the early 1970s we remember the thrill of seeing new organs being made and installed (and no doubt old organs removed) all over North West Europe, except in Great Britain, where ‘new’ organs were at best rebuilt rather than new. It did not seem at all unreasonable to remove a historic organ and replace it with a modern one, or to insert a modernist design in a mediaeval chapel with Victorian furnishings.

After the upheavals of wartime, the Germans embraced modern design and modern materials in a way seductive for many in Britain. Maurice Forsyth-Grant took David Lumsden to visit a number of new organs around Düsseldorf and Hanover. Their enthusiasm survives in this organ, in a style common in Germany, but now very rare in the UK. Apart from the Swell Salicional and Celeste, there isn’t a single stop that would have been encountered in a traditional English organ of the period. The German stop names indicate the influence of the German Organ Reform Movement; the French stop names of the Swell reflect its eclecticism.

The stoplist has been changed slightly from 1969. The Positif has a Sesquialtera (copied from the GDB in the Lyons Concert Hall at York University). It has replaced the Octave 1 and the None 8/9, which are now on the Swell, where they have replaced the Teint. The Messingregal 16 on the Great has been replaced by the Vox Humana 8. The Great Quintade 16 was re-voiced as a Bourdon 16. The Fagot 32 was provided with full-length resonators. Most importantly, the Great and Swell choruses have been increased in volume to somewhere close to the original.

There is an instructive short essay written by Maurice Forsyth Grant for the programme of the opening concert (available in his Positif Press book of 1987 and on the College website at http://www.newcollegechoir.com/the-organ.html). It shows that much thought was given to providing the specific stops required for a wide variety of music, a lot of it freshly available to players in 1969. This organ was built for the 17th and 18th century music of France and Spain as well as for that of Northern Europe. It acknowledged the need to contribute to the Anglican liturgical tradition, in the chapel where (according to Norman Cocker) Sir Hugh Allen was the person who “first made the organ smoke”. But more important was the need to be part of a European mainstream which had passed Britain by.

The essay also talks repeatedly about dimensional stability, emphasizing the day-to-day reliability and long term durability that would result. Grant valued predictable results from his materials and design. But at least as important is the quality of the work; considerable care went into the quality of the design, parts and assembly.

The builders have been advised by Prof. Edward Higginbottom, then Director of Music and his assistant Steven Grahl, and they have received advice from Paul Hale, a former organ scholar at New College. The electric wiring inside the organ, the electric stop action and the digital registration system were provided by Clive Sidney and Calvin Smith http://www.sidneys.org .The new keyboards and coupler chassis, and the new stop knobs, were provided by Baumgartner Orgelbau http://www.baumgartner-orgelteile.de

On March 6th 2015 Robert Quinney, the new Director of Music at New College, played a re-opening concert of music by Byrd, Buxtehude, Bach, Nielsen (Commotio) and Leighton.Webcasts are available at http://www.newcollegechoir.com/webcasts.html