NEW ORGAN FOR THE PUBLIC THEATRE AT TRINITY COLLEGE DUBLIN 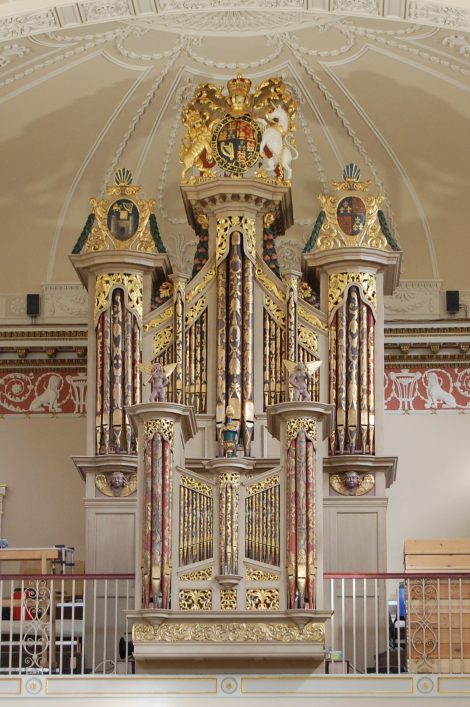 In 2017 we made a new organ in the historic cases in the Public Theatre at Trinity College Dublin. The Great organ was made by Lancelot Pease in 1684 as a 10ft transposing organ. In 1701 this organ was rebuilt by John Baptist Cuvillie as an 8ft organ with a GG compass with short bottom octave, and in 1705 he made a new Chair organ. Cuvillie had worked with Renatus Harris, and presumably stayed in Dublin after helping Harris to make the two cathedral organs.

The 1684 organ was moved to the new Public Theatre in the 1760s. The new chapel was provided with an organ by Samuel Green in 1797. Thomas Telford replaced both organs in about 1838. In the Theatre organ he re-used the old cases, though the front pipes were silent from that time, and the Chair case was retained as a screen only, behind the gallery rail. It is difficult to avoid the feeling that there was always an intention to replace it with a fashionable new organ when funds became available. The cases were not well made; they were repeatedly nailed together, shored up and repainted. Telford’s organ was itself rebuilt in the 1950s, and the front pipes were covered with dark brown paint. Gilded patterns were applied in time to welcome King Juan Carlos of Spain as an honorary fellow in 1981. The 1684 front pipes were also crudely made and they started to buckle and fall out of the case front. A report on the early history of the organ is available.

The project was guided by Professors David Grayson and Shane Allwright (TCD), together with advice about the specification from Ian Bell (consultant) and Professor Andrew Johnstone (TCD). It was managed by Monica Janson, Design Services Manager, Estates & Facilities TCD. The original appearance of the case was confirmed by a photograph of the Public Theatre taken in about 1904. The historic paint was investigated by Catherine Hassall. The original appearance of the front pipes, the shields and other ornaments has been magically recovered by Chris and Roanna Wells, restoring the original paint, reconstituting the patterns where there had been paint loss, and gilding the elements originally gilt, or originally intended to be gilt. The casework was painted by Charles and Liz Marsden. Nick Hagen restored and completed the historic cases, which were crudely made originally and had deteriorated to an appalling condition. He replaced missing carving and mouldings. Joe Marsden restored the equally crudely made and equally deteriorated front pipes.

The new organ is based on Renatus Harris’s organ at St Botolph Aldgate, which was built in about 1702, the same time as Cuvillie’s work at Trinity College. The 1684 Open Diapason and the 1705 Principal front pipes were used as the basis for the scaling and voicing. The original stoplist emerged from research during the building, but in any case it would have been decided to provide an organ with more versatility, including in this case an expanded keyboard compass and a small pedal organ. The old front pipes had a pitch about half a semitone sharper than modern pitch, though the tuning windows were very haphazard. The Great Sesquialtera is copied from that at Aldgate, with a fifteenth and a tierce of principal scale running through. The Twelfth, Fifteenth and Tierce therefore have a wider scale, as an organ by Harris or Cuvillie might have had. The Chair Furniture is in classical French style.

The organ was given the same tuning system as St Botolph Aldgate, a 1/6th comma meantone, with the wolf divided between c#-g#-d#-bb-f. It is based on Renatus Harris’s own instructions, which are given as a postscript to Godfrey Keller’s Compleat Method for attaining to play a Thorough-bass published in about 1705 as “Harris the Organ Makers way of Tuning His Organs by Imperfect 5ths & True Octaves”.

The organ was designed by Dominic Gwynn. The metal pipes were made by Joe Marsden, Chris Davies made the keys and the wooden pipes with Nick Hagen. Edward Bennett was responsible for the wind chests, key and stop mechanisms. The reeds were voiced by Rob and Abigail Balfour Rowley.

Great to Pedals; Choir to Pedals