Rothbury, Northumberland restoration of the 1866 Hill Organ at All Saints Church 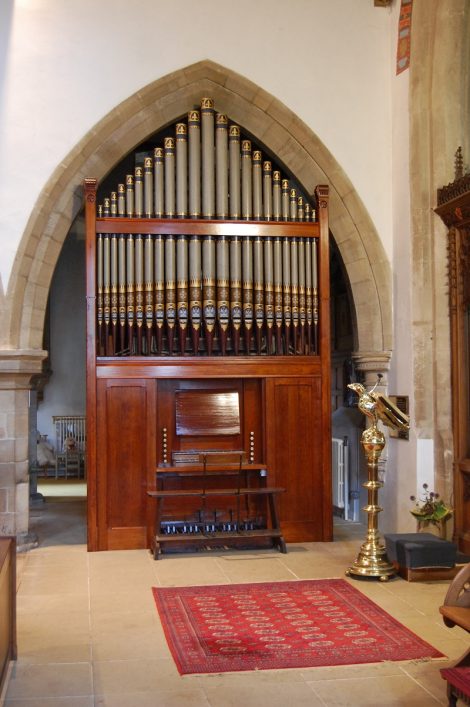 The organ dates from 1866, given by Lord Armstrong (then Sir William) and the then Rector. It was built by Hill & Son (job no. 1198 in the Hill estimate book, and markings in the organ). It looks like a standard organ, responding to the spread of congregational hymn-singing; Hymns Ancient and Modern was first published in 1861.

It started its life at Rothbury in a west gallery, and was moved to its present position at the east end in 1887 when the vestry was enclosed. After the First World War a false organ front was provided as part of the new furnishings for the chancel, as a memorial to those lost in the war. The organ was cleaned, repaired and overhauled at various times. In 1971 the wind chests and key action were restored in the manner of the times, and the interior of the organ painted battleship grey, by C. L. Sommerville and W. Welsh of Rushworth and Dreaper. Goetze & Gwynn Ltd restored the organ in 2016. The organ was inaugurated on September 17th 2016 by the Lord Lieutenant, Jane Duchess of Northumberland, James Lancelot organist of Durham Cathedral, the girl choristers of Durham Cathedral directed by James Randle and three young musicians playing an arrangement by John Casken.

Goetze & Gwynn Ltd have moved the organ to the north transept, facing across the nave. Much of the front of the organ had been removed when the memorial front was placed in front of it; it was replaced with new work in the original style by Nick Hagen. The original zinc front pipes were decorated with stencils quite simply; they were repaired and waxed to bring the colours out. The organ is very compactly designed with no passage board between Great and Swell; the tuner has to remove front pipes and place a passage board over the treble pipes. The organ was completely restored, wind chests, bellows and wind system, keys and key action, stop action and combination action. The worst element of the organ before restoration was the key action, and especially the pedalboard, which needed to be restored to reduce lost movement and noise.

Link to All Saints Church at Rothbury http://coquetdaleanglican.org/thropton/