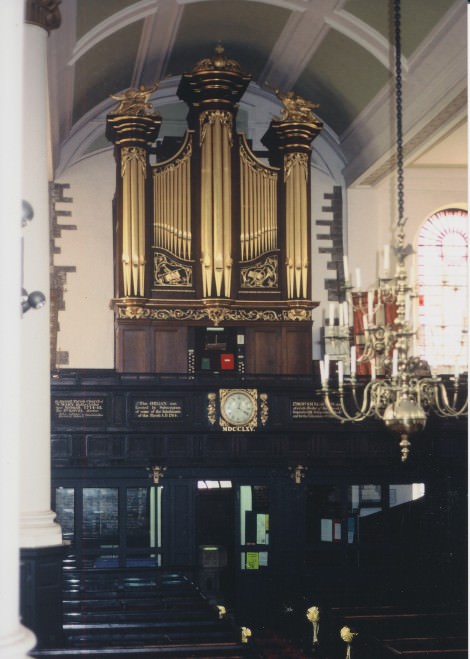 The organ was built as a three manual organ by John Byfield in 1765.

Probably in 1829, Hugh Russell filled the short octave and extended the compass to f³, from GG C AA D – e³ to GG – f³ long octaves.  At the same time he replaced the Great Nason with a second Open Diapason, the Choir Vox Humana with a Cremona from c#º and the Swell Cornet with a second Open Diapason.  He removed a rank from the Sesquialtera IV, removed the Great Cornet, and provided and octave and a half of pull down pedals.

In 1882 Gray & Davison provided a new console, with new stop action, new key action up to the roller boards, couplers and composition pedals.  They altered the compass, giving all the keyboards a compass of C to f³.  A Gamba replaced the Great Clarion, the Sesquialtera lost another rank and was recast, a Pedal organ with a single Grand Bourdon was provided, and a new full compass Swell.  This used the old pipes for each rank, the new Fifteenth using pipes from the Great mixture.  In the process alterations had to be made to the back case; the swell box was moved from its original position between the two halves of the Choir organ upwards, and the side walls were moved 30cm outwards, so that they are now flush with the side walls of the front case.  The roofs of the Great case were removed. A new horizontal bellows was provided, though only repairs are mentioned in the builders’ records.  At some stage during Gray & Davison’s care, the tuning was altered to equal temperament, and presumably the pitch was raised from the usual mid 18th century pitch, from about half a semitone flat.

In 1959 Noel Mander repaired the organ, and effected some alterations, putting in a new Great Cornet, mounted, replacing the Gamba with a Clarion (supposedly 1817, but actually ca1870), adding a bass octave to the Cremona and adding a third rank to the Great Sesquialtera. The feeders to the bellows were removed, a blower was provided, and tuning slides were fitted. In 1975 the front pipes were re-gilded and some of the larger front pipes were given new zinc feet.

In 1991, Martin Goetze and Dominic Gwynn made new roofs to the Great, repaired the Gray and Davison actions, and restored the Great Sesquialtera to its original composition. They replaced the 8’ stopped rank on the Great Cornet with a copy of the contemporary example at St George Gravesend, the 1959 pipes having deformed to make them untunable. The tuning system is now Young’s.

Great: the compass is now C to f³, so all the Byfield ranks have C# and f³ pipes by Russell

Swell: C to g are all Gray and Davison extensions of the Byfield Swell stops.

In 1991 the restoration of the Sesquialtera has provided the organ with a proper full organ again (the G & D mixture was a 1⅓’ and a 1′ which broke back an octave at c#²). The pipes had not been removed in whole or half ranks, but haphazardly, so that it was possible, following the pipe marks, to re-order the pipes and fill the gaps, voicing the new pipes in line with their neighbours. The following is the result:

The Rector of the church was The Revd. Nicholas Richards and the advisor was John Norman.  The history of the organ can be found in a booklet by a former organist, Austin Niland, published by Positif Press Oxford 1983, and it can be heard on youtube videos by the former organist Alan John Phillips.

Here is a link to the organ being played by Alan John Phillips on youtube https://www.youtube.com/watch?v=GTypeuEOl9k