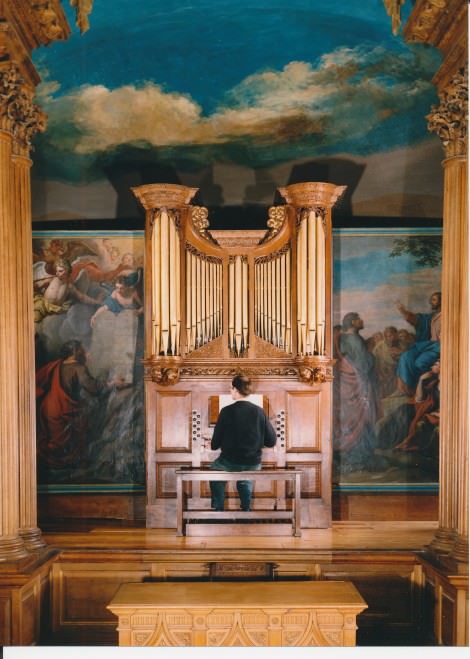 This organ was used by Handel when he worked for the Duke of Chandos at Cannons in 1717 and 1718. The remaining keys, the only ones that we know for certain that he touched himself, were preserved and displayed in a case of 1904. While in his employment Handel wrote the Chandos anthems and Acis and Galatea.

The organ is based on the surviving parts of the 1716 Gerard Smith organ; the case, front pipes and a rank of inside pipes, and 3 octaves of the original keys. The case and the surviving pipes have been studiously and carefully restored. The case had suffered, but the front pipes, unused since 1877, are in almost unaltered condition. The remainder is based on the organ at St Mary Finedon, which we thought was made by Gerard Smith in 1719 (cf Hopkins & Rimbault 3rd 1877) but now turns out to be Father Smith 1704.

Most of our aims are combined in this project. The organ is an instrument of character, well-suited to its main task of complementing and encouraging the worship of the St Lawrence congregation. It is a new organ, reconstructing Handel’s organ of 1716 from the surviving evidence. The organ is one of the very few on which the music of Handel and his contemporaries can be performed faithfully.

Couplers: Swell to Great Great to Pedals Swell to Pedals

The Rector was Paul Reece, the advisor John Norman.